This article was printed in the Ojai Valley News on March 23, 2001. It is reprinted here with their permission.

Walking through Libbey Park on a recent sunny day, infused with the feeling of springtime, we began taking a closer look at the trees. “Could be maybe seven kinds,” said one of the walkers. “Think there are maybe 10 species just here in Libbey Park.” said another. “Well, there are two kinds of oaks, pines, sycamores, eucalyptus. That’s five. And there’s a palm tree, that’s six.”

We were wondering who could tell us about the trees of Libbey Park, and a few days later, we met arborist and Ojai resident Paul Rogers. We asked him if he could give us a little tour and identify the different trees in the park.

We started our tree tour with Rogers in front of the post office, walked east on the sidewalk, under the canopy of a young live oak and into the pergola. At the center of the pergola we turned right into the main front entrance of Libbey Park. This entrance is guarded by two young valley oak trees, one on each side. Surrounding these two small native oaks is a group of evergreen pear trees, their bright green leathery leaves sparkling in the sun. This lovely species of pear tree is a long way from its original home, it is a native of Taiwan.

Non-native plants may look as natural as natives, but when whole plant communities are considered, natives are generally a more positive factor in ecosystem stability. Some people think more consideration should be given to the native plants that have lived and evolved the Ojai region for many thousands of years. “We are trying to define what trees are going to be here,” said Rogers.

Looking toward the post office we can see a little grove of mock orange shrub and two large live oaks. The medium-sized tree with the long skinny beans hanging from its branches is a catalpa, or Indian bean tree, native to the southeastern United States.

Looking back toward the fountain, at the Kittie Pierpont memorial, is a pistache tree. And past the fountain, in the northeast corner of the park, are a half-dozen of California sycamores.

Walking across the pavement to the south side of the fountain, we entered the heart of Libbey Park, pausing for a moment at the Austin Pierpont Rose Garden. Then we read the plaque at the base of the flagpole. “In grateful acknowledgement of the gift in the year 1917 by Edward Drummond Libbey of this wooded land…”

As we faced south, looking over the dedication plaque and past the flagpole, we saw a beautiful big pine tree. “Monterey pine, native of California,” said Rogers. “It likes the coastal environment. It’s not necessarily a good choice for inland areas, but this one is doing well here.” We walked about 25 yards along the paved path to the first intersection, then turned right down the park’s central walkway.

“Beautiful, isn’t it?” said Rogers. “It’s like a continuous canopy through the park.” Large old live oak branches reach way up over the path, their ends mingling in an ethereal feeling with the blue sky.

“We have a lot of big trees in here,” said Rogers. “See that one over there, that’s another valley oak, it’s about 250 years old. We have some in town that are over 500 years.”

We continued walking along the central path through the park. “Deodar cedars, sometimes called California Christmas tree,” said Rogers. We walked past three large specimens of deodar, then under the wooden trellis structure, and followed the path to the right of the tennis court bleachers.

“This is another Monterey pine,” said Rogers. “They were donated to the city, probably from people’s Christmas trees.” The smaller one is about 10 years old and the larger one perhaps 15. “They are fast growers,” he said.

“These are red iron bark eucalyptus, beautiful pink flowers as you can see.” We looked at a couple of them just past the Monterey pines. Then as we looked up high, “Those skyline trees are red gum eucalyptus, they are the ones having an insect problem,” he said.

Several more young California sycamores are establishing themselves in the lawn area of Libbey Bowl. We walked to the seating area of the bowl and paused, looking at the unusually shaped sycamore tree at the west side of the seating area. “There is a lot of lore about it, saying it was bent over by Indians to mark a spot. Whether that is true or not I don’t know.” Rogers explained that this old sycamore is not in a happy environment, because of so much paving around it. “We need to aerate this asphalt, we need to create a better environment,” he said.

“That’s (an example of) the conflict between development and the environment,” he said. “It would be terrible if these tree were not here.” 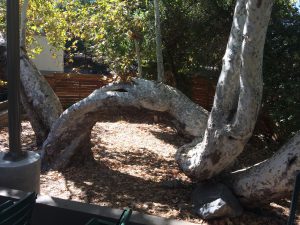