This article was published a few years ago in the Ojai Valley News. It is reprinted here with their permission.

“Do not buy in Ventura or elsewhere what you can buy at Nordhoff, especially when you can get equal value for equal price. You can get the best phonograph in the world and the best records to use with it right here in Nordhoff – The Ojai Bakery.”
The Ojai – May 27, 1909

Wilhelm Koch had the normal childhood feeling of most boys being raised in Germany. He was born in Marburg on May 4, 1873, and, undoubtedly, grew up with the hopes of attending the university in his home town. The Phillips University in Marburg was founded in 1527 and was the first Protestant university in Europe.

With the mandatory military draft in Germany, young Wilhelm’s father felt it was in the boy’s best interest to have him leave the country. His father, inspired with the ideals of democracy, sent him to America.

As a child, Wilhelm had shown exceptional talent as a sculptor, so a life career as an artist was to be his destiny. His artistic ability in America was brought out in the catering departments of some of America’s finest hotels, including the Waldorf Astoria in New York, the Bellevue-Stratford in Philadelphia, the Arlington in Washington, the St. Charles in New Orleans and the Huntington in Pasadena.

With the United States entry into the first World War in 1917, the government offered a prize of $500 to the baker who produced the best wheatless bread. Wilhelm decided to enter this contest with high hopes of receiving the prize money for the sole purpose of changing his name. Not only did he win the competition, he won first and second prizes and the sweepstakes, and promptly change his name to William Cook Baker.

It was while working in Pasadena that William Baker would discover the charming seaside town of Ventura. His success was already becoming quite apparent by his being named assistant food administrator for Southern California under Herbert Hoover. So he decided to open his own bakery in Ventura and, being patriotic, it was only natural that he would name it The American Bakery.

Baker would operate the bakery for six years until the lure of the beautiful Ojai Valley attracted him. In 1923 Baker bought out the Ojai Bakery. Emile Gerstenmeyer had operated the Ojai Bakery for many years and he carried a large assortment of merchandise: candles, soft drinks, phonographs and records, books, magazines, picture postcards and, of course, fresh bread, cakes and table delicacies were on hand at all times.

Under the new ownership, the bakery changed its name to Bill Baker’s Ojai Bakery. The bakery was set to become world famous.

In 1927 Bill Baker hired the well-known Santa Paula architect Roy C. Wilson to design a new building for the bakery. Construction was to be of brick and stucco and the architecture was to be of the Spanish style, to compliment the newly built school across the street. The architect had earlier designed the San Antonio School and the Nordhoff Grammar School, along with some of the valley’s most spectacular homes.

The new bakery was very modern, the structure was actually two buildings with a drive between them. One building was used as a salesroom and the other for equipment. George Noble was in charge of the construction and Frank Harrow did the concrete work. The beautiful new building added the needed architectural enjoyment for the tourist entering the town from the east. Through all the construction, the ovens of the bakery continued to turn out their regular quota of loaves of bread and pastries with little interference.

The first of Bill Baker’s many elaborate presidential cakes was sent to President and Mrs. Calvin Coolidge in 1927. The large fruitcake was decorated with a small village in the snow and a detailed Santa and sleigh – the first of the many famous cakes produced by Bill Baker’s bakery.

On Feb. 2, 1928, Bill Baker was called to Santa Barbara for a meeting with Dr. W. D. Sansum of the Sansum Clinic. The doctor was interested in finding a baker who could produce a bread to meet his rigid qualifications. Baker had been experimenting with lima bean products successfully and the American Institute of Baking in Chicago had tested his product and proclaimed it to be the best. Dr. Sansum encouraged the use of this lima bean bread in an article written for the Chicago Tribune. The popularity of this new bread grew and it was shipped to many parts of the United States, even as far as Alaska and Hawaii.

By June of 1928, a formal wedding in Seattle, Wash. would have at the reception an elaborate wedding cake made by the bakery in Ojai. The Lions’ convention in the east would also receive one of Bill Baker’s 30-pound fruitcakes. The Lions’ Club cake was decorated with a replica of the Ojai Valley in sugar and surrounding a miniature of the Ojai Catholic Church (now the Ojai Valley Museum).

The 1930’s would see an extensive increase in development of the bakery. The lima bean products, including the lima bean bread, wafers and the new lima bean toast, were in demand from everywhere. Baker decided to advertise the bakery and the Ojai Valley by having a new label designed for his waxed paper wrappers. The labels were silver with “Made in Ojai, California” in blue. There were 550 loaves of bread being shipped each day, advertising the news that Ojai was the center of Bill Baker’s lima bean baking industry.

With the success of the lima bean products, Baker decided to try his hand at developing a soybean bread. Doctors had long suggested the use of soybean as a health food, using it in soups, muffins, etc., but for commercial baking. It wasn’t long before Bill Baker’s Bakery had created a popular and palatable product.

As if all the new bakery items weren’t enough to keep Bill Baker busy, he decided to enter the Elks’ charity event, the “American Horned Toad Derby” being held at the Ventura Bathhouse. His entry was called “Lima Bean”, and Baker put out a press release stating: “I am keeping my Horned Toad on a strict diet of lima bean bread and toast as it has been proven that this will keep down high blood pressure and prevent acidosis. I am betting heavily on ‘Lima Bean’ to win and advise my friends to keep an eye on this contender, for he is a sure winner.” Win or lose, it didn’t matter, it’s how he played the game that was the true sport.

By the end of the year 1930, Bill Baker’s Bakery had added another truck to their delivery system and the bakery was now up to 1,600 loaves of lima bean bread a day – quite an increase from the 500 loaves a day that he was producing at the beginning of the year 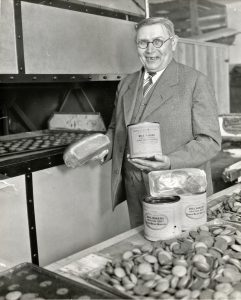 The President and Mrs. Herbert Hoover received a Bill Baker’s cake in 1931, a 50-pound fruitcake made entirely with California fruits and nuts. On the top was a scene of Ventura with a Christmas angel flying overhead.

In 1936, President and Mrs. Franklin D. Roosevelt received a Bill Baker masterpiece. The Christmas cake was a 200-pound affair, a fruitcake decorated with star-spangled pillars with red, white and blue bars. In each section was set a green Christmas wreath with a pink bell and bow. The edge of the top was encircled by 200 beautifully made red poinsettias. The top was covered with a green sugar lawn and sugar shrubs, trees and the sugary path that led to the center where the White House glistened, topped by “Old Glory.” On the lawn was written “Merry Christmas to President and Mrs. Roosevelt.”

With the anticipation of the people of California in 1939 toward the San Francisco World Exposition, it was only proper that Bill Baker would have to be part of this important event. What he spent a year in designing and building was a cake weighting 1,000 pounds, which measured 5 feet across the base, 3 feet high and 3 feet across the top layer.

The base of the cake was decorated with an arched colonnade with a red tile roof. Upon the bottom layer were replicas of all the California missions in exact detail with the mountain ranges behind them. On the side of the second layer were numerous towers, replicas of the beautiful tower that dominated the exposition. Between the towers were palm trees and pink roses connecting the towers to each other.

The top of the cake was a miniature San Francisco Bay, with the three famous bridges connecting the islands to the shore. Even the bay cities were shown in their harbor districts. The most exquisite piece of icing on the cake was a miniature of Treasure Island with numerous ships sailing across the top. The cake instantly became one of the great wonders of the exposition. 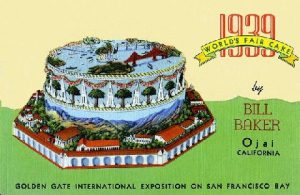 In 1942, Baker contacted poison oak in the back yard of his home in Lake Sherwood and was rushed to the hospital in Ventura. He did not make it through the ordeal and died. The story of Bill Baker comes to an end, but the famous bakery that carries his name was just starting a new chapter.

Longtime faithful employees of the bakery, Harmon and Helen Vaughn, continued to keep the plant running. They saw to it that everything was operated as Bill Baker had desired — top quality and fair practice.

The Vaughns had arrived in Ojai on March 31, 1936 from Arkansas. They liked what they saw and decided to make a life for themselves in the small valley. They were hired by Bill Baker to work for his bakery on their second day in town.

In 1946, the Vaughns bought the bakery from Bill Baker’s widow and continued the service, retaining the Bill Baker’s Ojai Bakery name. The Vaughns ran a most successful operation, keeping up the high standard that had been set many years before and finally retired in February 1974.

The famous bakery, one of the oldest continually running businesses in Ojai, is still a success today. The building has been modified somewhat, but still retains the beauty and charm from 70 years ago. 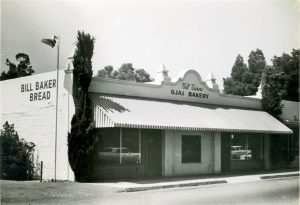