The following article appeared in VOLUME 38 NUMBER 1/SPRING 2020 issue of “Ojai Valley Guide” on page 159. This magazine was published by the “Ojai Valley News”. The article is reprinted here with their permission.

For a vacation like that, you have to have some reliable wheels. I accompanied my dad to the auto dealership in Ojai to bring home the 1961 Chevrolet Apache half-ton pickup with a 283-cubic-inch engine and three-on-the-three manual transmission he had ordered. I was only 9 years old, but remember the experience like it was only yesterday.

The Tom Mahon Chevrolet dealership is where Jersey Mike’s is now. There are all these big windows at this sandwich shop because it used to be the showroom floor for displaying the new-model vehicles.

Jersey Mike’s is in a long, narrow building that also houses St. Thomas Aquinas Thrift Shop, She Seeks Nomad, Cuts & Curls, The Ojai Donut Shoppe, Kristy’s Nails, and La Fuente of Ojai. All these businesses are in what used to be the mechanic’s bays with really tall, roll-up doors.

Dad and I were led out of the office by the car salesman to the parking lot adjacent to the bays. A few other employees gathered near us. All the bay doors were closed. We waited with bated breath while the salesman had us look at one of the doors. It slowly rose and there was Dad’s brand-spankin’-new pickup. A gent was in it. He drove it slowly out to the parking lot. The keys were handed to Dad as the salesman and others congratulated him. It was a BIG DEAL back in those days! I swear, it was like a grand opening of a new store or something. I’m surprised they didn’t have some uplifting, symphonic music blaring. But, all I could think was something like, “Dad, with all the colors available, you chose coral?” . . . which was basically pink.

Dad never sold that pickup, though he did paint it a number of years later. At one time it was white, then dark blue, then primer gray. When it was younger, he called it Betsy. At the end, he called it Old Gray.

Dad passed in 1998. Mom had me donate the pickup to a charity. It was like cutting off an arm as Old Gray was towed away. 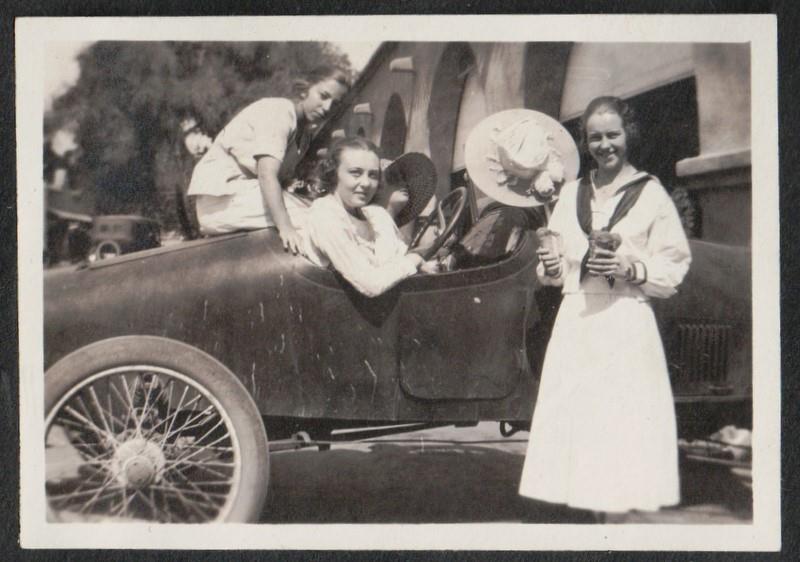 We’re not sure when this photograph was taken; perhaps shortly after the Arcade was completed in 1917. That’s the Isis Theater in the background. Note the sunshades on the arches!

Thanks to Brian Aikens for the photo!