Meiners Oaks, a community where nearly every home is under a Live Oak tree, takes its name from John Meiners, who owned the large area for many years.

John Meiners, native of Germany, had come to the United States about 1848 and had established a successful brewery business in Milwaukee. He acquired his Ojai ranch in the seventies, sight unseen, as a result of an unpaid debt. When he heard that his friend, Edward D. Holton, a Milwaukee banker, was going to California for a brief trip, Meiners asked him to see the property he had acquired. Mr. Holton’s evaluation was, “It is the most beautiful valley I have ever seen.”

Upon investigating his new property, John Meiners found that he owned what was perhaps the largest oak grove on level land in Southern California, much of it so dense that the ground was in continuous shade. Furthermore, to his surprise, Meiners discovered that the climate of the valley was good for his asthma.

For a long time, the oak grove was fenced and provided a pasture for a large herd of hogs. All traffic from Ojai to Matilija went on a private road through the Meiners property, using a gate which was supposed to be kept closed. So many people went through the gate without closing it that in 1893, the manager of the ranch, P.W. Soper, locked the gate. With the Meiners road closed, the only way of getting the mail to Matilija by stagecoach was a roundabout one by Rice Road.

A news item in “The Ojai” related that, as Rice Road has been flooded, “the mail was sent up to Matilija last night on horseback, the rider going across the back hill country . . .” However, Mr. Soper later gave several keys to A.W. Blumberg, operator of Matilija Hot Springs, with the stipulation that they were to be used only by mail carriers and scheduled stage coach drivers.
In 1896, the big barn on the Meiners ranch, located approximately where the Ranch House Restaurant is now, caught fire one evening about midnight. No fire-fighting equipment was available. Twenty horses, many tons of hay, harness, and farm implements were completely destroyed. “The Ojai” of February 15, 1896 reported . . . “Mr. Meiners built a large temporary barn on Monday, and the work of the great ranch goes on energetically.”

The Milwaukee brewer lived on his ranch intermittently from the 1880s until his death in the valley in 1898. His original big house still stands on the hill above the Ranch House Restaurant and is now used by the Happy Valley School.

John Meiners organized his ever-increasing acreage into a very productive ranch. Several hundred acres to the north of the oak grove were planted in oranges, lemons, prunes, apricots and apples. P.W. Soper, father of the late “Pop” Soper, was general manager of the Meiners Ranch and lessee of 90 acres of Texas red oats, 90 acres of wheat and 200 acres of barley. A visitor who toured the ranch with Mr. Meiners in 1897 wrote, “At the Meiners Ranch we saw stalks of oats that measured 7 feet 7 inches.”

To visualize the vast area, the ranch can be described as bounded on the south by the hills of the Happy Valley School, on the west by Rice Road, on the north by the foothills near Cozy Dell Canyon and on the east by a line running through the junction of Highway 33 and El Roblar Street, north and south.

The forebears of several of the present-day residents of the Ojai Valley came here as a result of John Meiners’ interest in his ranch. The granddaughters of Edward D. Holton, who made the original favorable report concerning the ranch of Mr. Meiners and the Ojai Valley, are Misses Alice and Helen Robertson of the east valley, and his granddaughter, Mrs. Anson Thacher. Otto Busch came to the ranch as manager in 1907, and his son George Busch, now retired, was one of Ojai’s postmasters. 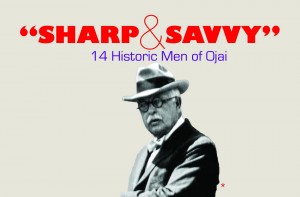