The following article first appeared in the July 12, 1981 edition of the Ojai Valley News. It is reprinted here with their permission.  Photos have been added by the Ojai Valley Museum.

Friends of Howard Bald Gather in His Memory
by
Bob Bryan

One thing is certain – you can’t be in two places at the same time. Up there in the High Sierras, I couldn’t be part of the coming-together that Otto and Vivika Heino had for Howard Bald, their neighbor, last week.

It was done with the simple high style and sense of joy that Vivika always brings to an occasion. In the breezeway of the house that Beatrice Wood built brick by brick, the friends of Howard Bald gathered to do him honor and celebrate the memory of the man. Perched on the wall were three Western-style hats of Howard’s that the Heinos had inherited, as well as a composition in weeds that Vivika had fashioned. Everybody brought something to the occasion, including memories to be shared. What was to be honored was not only a man but a way of life, now by and large gone.

Connie Wash spoke of the man and Peggy Thacher brought a letter she had written back in the days of World War I when patriotic girls had been urged to write the doughboys over in France. Howard Bald, who may well have sensed the senselessness of the slaughter of this “war to end all wars,” treasured that letter that Peggy Thacher as an 8-year-old child, had written him. He brought it home with him from overseas and gave it back to the girl who had written it.

After vittles in the breezeway, the friends gathered, in the cool of the evening just about when the “pink moment” settled on the hills, around the pool in the patio. Remember that time, someone said, when there was a fire across McAndrew Road and Howard came rushing out of his house and put it out? And how about that time, late at night, when Beatrice Wood, that eternal virgin of the spirit, thought that a car parked in front of her house was a threat to her purity? It did not move and finally, in her fright, Beato called good neighbor Howard Bald. He came out, brandishing a pistol, much as he might have gone “over the top” from one of the trenches in Flanders. What he found was a young couple engaged in some heavy petting, as it was called in those days, or making out, as it is described in these days.

A high point of the festivities was the tale often told about the Pierpont boys, Phil and Austin, those hellraisers of a former time. Turned out they had one of the first of those con-sarn horseless carriages in the valley and they drove lickety-split all about the place. Howard Bald, on horseback, vowed that he would get those Pierpont boys for making such a ruckus, and frightening his horse. But as it turned out he didn’t need to worry. Fate took care of those Pierpont boys and Howard didn’t have to take a bead on them.HOWARD BALD believed, for sure, that citizens should be allowed to carry arms and fire them when the occasion demanded. When the blue jays and other predators of his fruit and vegetable rows got too greedy, Howard would suddenly appear and fire his trusty double-barreled shotgun into the air and, momentarily, scatter those varmints. Howard, as an ex-doughboy, may have, from time to time, fired his piece into the air for the simple joy of it. It certainly used to scare hell out of Ann McGarrity, his neighbor up the hill.

After the horror of World War I, Howard settled to a life of the good things and the good neighborliness. Two wives blessed him and he blessed them. And in his neighbors, such as Beato and Vivika and Otto Heino he was especially blessed. During his final days, it had become his custom of an evening to walk over, with his vial of whiskey, which he insisted on bringing, to the Heinos and there share drinks. 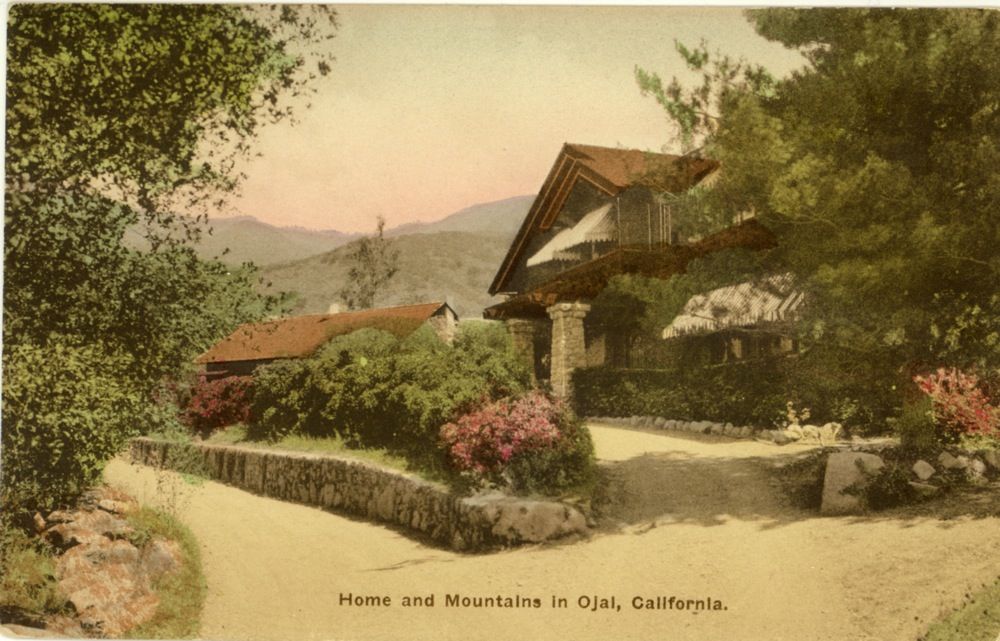 The Pierpont-Ginn House. After the death of her husband in 1905, Josephine Pierpont married the San Francisco publisher Frederick Ginn. She commissioned the famous California architect Julia Morgan to design a house for her in 1908, shown in this picture, one of Julia Morgan’s first residential works. The family’s first home then became the main house for Pierpont Cottages.

Note: This was one of Julia Morgan’s first residences.  She is best known for designing Hearst Castle in San Simeon.