The following article was written by Dorothy P. Butler for the “Ojai Valley News’s” OJAI GOLDEN ANNIVERSARY – 1921 TO 1971 celebratory booklet (page 22). It is reprinted here with the permission of the Ojai Valley News.

The Women’s Club – A Long Record of Service
by
Dorothy P. Butler

“Enabling” could be the one word to describe the activities of the organization that began as The Ojai King’s Daughters in 1899, and later, in 1915, became The Ojai Valley Woman’s Club. A careful scanning of the minutes reveals such a multiplicity of appeals from the community to this group of women that one wonders how through seventy years they have all been met. The record is all the more remarkable when one considers that dues in 1939 were still $2, and that all moneys contributed for the support of community ventures had to be earned, as well as funds for the furnishing, maintenance and improvements in the clubhouse itself which has served as a home for many valley groups and projects.

The early group, known as The Ojai King’s Daughters, was organized in 1899 as a women’s auxiliary of the Presbyterian Church then located on Gridley Road. Later, when the building was moved to the corner of Ojai Avenue and South Montgomery Street, it shortly began to sponsor classes for boys in carpentry, referred to Sloyd classes, and for sewing and other domestic training for girls. [Sloyd is derived from a Swedish word which translates as crafts or handiwork.] Materials were purchased and exhibits arranged. Known as the “Industrial Classes,” these exhibits were held in the Upper Ojai, San Antonio and Nordhoff schools. A detached building, now connected with the clubhouse, was used for the sloyd classes until the schools themselves eventually took over the work.

Keeping litter off the streets was already a problem. The women not only set an example by themselves sweeping the streets and sidewalks, but also sponsored a group of boys who cleaned away litter every other Tuesday (and busying themselves cleaning out the schoolhouse stable in the alternate Tuesdays!). The members were also the first in the Valley to protest roadside billboards.

Meanwhile, initiative and support were undertaken to bring musical programs and lectures to the Valley for all to enjoy.

So effective was this work that in May 1909, Mrs. F. B. Ginn disclosed she would use the legacy left by her husband “to benefit a worthy organization” in building “a convenient and appropriate clubhouse for the use of The King’s Daughters.” Eventually a new society was formed to be called The Ojai King’s Daughters Association and incorporated in order to be able to own property. The clubhouse itself was dedicated on March 10, 1911.

It became the meeting place not only for the women who drove to town over the dusty roads, but also for their menfolk in town on business. The slant top desk, still in existence in the foyer, was used by the men for calculating business records. Both men and women enjoyed cool lemonade in summer, hot tea and open fires in winter.

In December 1914, the Association voted unanimously to change their status to that of A Woman’s Club, “the object to enlarge our sphere of usefulness.” In February 1915, the change was made official with the adoption of constitution and bylaws.

Within three years the club had helped two great Valley emergencies. During 1917’s big fire the clubhouse was headquarters for relief and distribution of supplies. During the severe influenza epidemic the following year, the clubhouse became the nurses’ home. Here they slept and were served their meals. Clubwomen did all the work plus the work in the diet kitchen, where meals were prepared for patients who were housed in the Boyd Club, which then stood [at 307 E Ojai Ave]. All through the war it was turned over to the Red Cross, and here was done all the sewing, rolling of bandages, and the packing of cartons of these supplies.

Then began in earnest the trend, still continuing, of offering meeting place to many organizations. The clubhouse became, during the years, home to six churches while they worked toward the day when they could occupy their own buildings. In 1928 the club members were asked to back the start of preschool age children’s conferences. The PTA has been housed during the lunch hour to prepare hot meals for needy children. Music and dancing classes chose to hold their sessions there. Brownies, Camp Fire Girls, Bluebirds, Girl Scouts have met within its walls. At different times the club has sponsored these groups, at one time two Girl Scout groups.

The schools have turned to the club for kindergarten space before their own facilities were built, and much later, during World War II, the kindergarten again met for four years in the clubhouse.

Shortly after the Ojai Valley School introduced folk dancing in the Valley, the club backed the idea that folk dancing be made available in the public schools with a gift of $100. This support was repeated many times.

In other ways Valley recreation was encouraged. $100 was given to the Ojai Valley Recreation Coordinating Council in 1955 and 1956. The Summer Playground was always included in the budget. In 1960 the city asked for the club’s support of a Sports Advisory Committee, and later [the club] informed the County Board of Supervisors of [their] approval of using the Soule property for a golf course. When the Boyd Club was moved to Sarzotti Park, the members helped in furnishing it.

In 1963 the club gave its first scholarship to a Nordhoff High student. By 1965 this was doubled to include both a boy and a girl. The scholarship funds come from money earned by the members over and above the club’s regular income.

Meanwhile, continuing a policy implemented in the early days of the century, the club brought to the Valley for six successive years a lecture series by Mrs. Lorita Baker Vallelly, at that time considered the most thoughtful and provocative commentator in Southern California in the fields of political, literary, and dramatic analysis.

The crisis needs continued to be met. In 1942, the club initiated a drive for the purchase of a resuscitator to be used by the Ojai Fire Department. Funds were quickly subscribed in response to the appeal, and the equipment demonstrated in June of that year.

From the days of the first Calling Committee, the members have sought to be a source of friendship to all within the Valley. In 1940 the Chamber of Commerce agreed to furnish the bowls for a new venture suggested by the club. A group of members volunteered to call on all newcomers with a letter of welcome tucked among the greens of flowers filling each of the bowls. The first paragraph of the first letter epitomizes the spirit of the project:

“Dear Newcomer . . . As the Christmas season draws near, the people of Ojai want you to know we are thinking of you, are glad that you have come to live with us, and want to help you in any way we can make you feel at home.” Then following a listing of Christmas community activities, ending with the query, “Won’t you let us meet you on some of these occasions?
Los Saludadores
(Those who greet you)”

World War II naturally turned our attention to grimmer tasks, but never through the years has the club lost sight of the desire to be a homelike setting for newcomer and older resident alike to greet each other, and create new friendships. Through these the newcomer has quickly found a way that “enables” her to help in strengthening the quality of life so unique in this community. 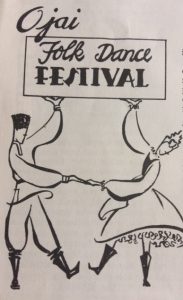