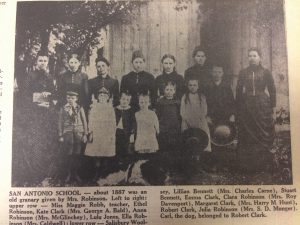 Norman Marsh was a well-known Southern California architect who was proficient in several architectural styles. He designed Santa Monicaâ€™s Parkhurst Building in Spanish-Colonial style, the University of Redlands in neo-Classical style, and Abbot Kinney’s Venice Beach development as a replica of the famous Italian Renaissance city. Marsh’s firm designed many schools, libraries, and churches, throughout Southern California.

Mr. Marsh designed the new Nordhoff High School so that, in his words, “every window will extend to the floor and will swing open their entire length. The pupils will in ordinary weather practically work out of doors.” This was a revolutionary concept in school architecture at the time, but it has since been used extensively in schools throughout America.

The new Nordhoff High School campus opened in the fall of 1911 with 40 students. In 1916 wealthy oil tycoon Charles Pratt, who owned a large Greene & Greene Bungalow home on Foothill Road, donated the funds to add a manual arts building and a domestic science building to the campus. Walter Bristol hired Norman Marsh to design these buildings also. The great Ojai fire of 1917 destroyed one of them, but Mr. Pratt donated the funds to have it quickly rebuilt.

In 1929 Santa Paula architect Roy Wilson designed the school’s Mission-Revival buildings along El Paseo Road, with the school auditorium added in 1936. Yet, the aging Bungalow-style building pictured at the top of the page continued to be used as classrooms until 1966 when the high school and junior high school swapped campuses. At that time it was torn down and replaced by the nondescript classroom buildings that face Ojai Avenue today.