This article first appeared in the Miravalley News in May of 2000. The author is Al Warren.  The color photo was added by the Ojai Valley Museum. 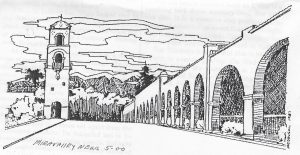 THE OJAI VALLEY MUSEUM AND “THE OJAI”
by Al Warren

By taking just a few short steps across a sunny courtyard, you may escape the activity of Ojai Avenue and enjoy the serenity of the 18th, 19th and early 20th centuries. The locale is the Ojai Valley Museum, housed in an exquisite replica of early mission style architecture. Built as a church in 1919, the museum is the only building in Ojai on the National Register of Historic Places. A striking stained glass window and massive wooden doors adorn the front of the structure. In 1969, the Ojai Valley Historical Society was incorporated to give Ojai’s history a fitting home. After several moves, the Museum has found its home.

Inside is a remarkable collection of documents, artifacts, newspapers, and pictures that recreate the Ojai scene from time before the Spanish intrusion in 1542 through the early settlement years, long before the area changed its name from Nordhoff to Ojai.

Fittingly, the exhibit nearest the entrance is devoted to the earliest inhabitants of this area – the Chumash people. Tools, weapons, utensils, ornaments attest to the presence of rich Canalino/Chumash cultures. For as long ago as 2000 years well organized villages existed, including permanent sites on the Channel Islands.

Adjacent to the Chumash story is an equally well displayed collection of memorabilia recounting the history of the settlers who established the roots of this community. Names that now identify streets, schools, and parks become real people through photographs and documents that record their accomplishments. Tico, Blumberg, Pierpont, Baker, Libbey, Soule, Thacher are a few of the many who contributed to the history of the Ojai valley.

A highlight of a visit to the museum is the diorama depicting the Sespe Wilderness area. A beautifully painted backdrop surrounds lifelike representations of the wildlife and vegetation indigenous to The Sespe. The scene is breathtakingly real, including the huge boulders. Museum Director Robin Sim told me that these were man-made and added, “Real stone would be much too heavy.”

I had to believe her. They looked real to me. She assured me also that what I saw as a blank wall next to the diorama, she could see as a door to a children’s section — coming soon. Remarkable vision!

As you leave the Sespe diorama, a sculpture of real stone is visible through the rear windows of the building. This magnificent piece, “Condor Soaring”, was sculpted by Carlyle Montgomery who died in 1998. The condor appears alive. Sculpted from a 9000 pound slab of black Belgian fossilized limestone, “Condor Soaring” stands in the patio at the rear of the museum.

The Gallery is a room set apart from the permanent exhibits. Its intended use is for viewing exhibits of ongoing events. Subjects are changed periodically. Currently featured is “The Ojai”, one of the most durable and respected tennis tournaments in the world. The exhibit billed as “100 Years of Tennis” is a nostalgic tribute to the Ojai residents and organizations whose time and enthusiasm have maintained the tradition of quality tennis competition for over 100 years. Actually, the present format of single elimination matches began in 1899.

It isn’t necessary to be a tennis buff to enjoy this beautifully executed exhibit. Photographs and manikins display the gracefully inappropriate feminine tennis wear. Pictures of the players and spectators abound. The placards record the history of Ojai as well as that of tennis. Displays of old rackets and tennis balls evoke fond memories for anyone who has ever stepped on a court.

The greatest players in the world have competed on Ojai courts. The list is long: Bill Tilden, May Sutton Bundy, Helen Wills Moody, Ellsworth Vines, Pancho Gonzales, Alice Marble and Billie Jean King are among the best known, but not necessarily the best of a distinguished list.

For old tennis hackers such as I, this is a touching trek down memory lane. For anyone else, it is a creative and professionally prepared exhibit of an event that has brought very favorable attention to Ojai. Competition in “The Ojai” begins the last week of April.

Our Museum is proof that size is not necessary to assure quality. On Wednesday through Friday the doors open at 1:00 P.M. Saturday and Sunday the opening hour is 10:00 A.M. A gift shop is on the premises.

The Museum is located on the corner of Blanche Street and West Ojai and the phone number is 640 1390.