The following is the text of a talk given by historian and author Craig Walker at the Ojai Valley Museum’s 2018 Annual Meeting at the Acacia Mansion. 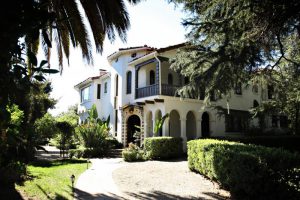 The Acacia Mansion was originally named Acacia Lodge. The acacia tree was a symbol of purity, renewal, and immortality. A lodge is a meeting place; it is an organizational term used by Theosophists—as in The Ojai Lodge. This large, two-story home has 10 rooms and is a wonderful blend of both formal and exotic architecture. We are so fortunate the building has retained its integrity of design over nearly 90 years. It is now a Ventura County landmark and eligible for the National register of historic places.

Designed in 1927, the Acacia Lodge was one of the first homes built here in Meiners Oaks. If you look at photographs taken from the hill above the Ranch House around 1928 or 29, you see this house standing pretty much by itself.  In 1924, Meiners Oaks was a 1,200 acre working ranch. By 1927 there were only five families living here.

Although the architect, John Roine, isn’t the most famous architect to have worked in the Ojai Valley, the house is a genuine masterpiece of Spanish-Revival architecture… rivaling those designed by more famous architects like Wallace Neff, George Washington Smith, and Mead & Requa.

The Architecture is Spanish-Moorish, with a heavy emphasis on the “Moorish.” All Spanish architecture has Moorish features.

Moorish culture–“North-African Arabic”–influenced all Spanish Architecture because the Moors invaded Spain in 711 a.d. and ruled the Iberian peninsula for over 700 years. Examples of Moorish architecture in Spain include the Alhambra in Granada and La Mezquita in Cordoba.

Some California architects, however, included more Moorish features than others. Richard Requa, the primary architect of Ojai’s downtown buildings, really liked Moorish architecture. He travelled extensively in North Africa making lots of sketches, but his Moorish design elements were much more subtle than Roine’s. The Ojai Arcade is a good example. You can see the Moorish influence, but the emphasis is more on the California Mission style. It should be noted that the Moorish influence on the Arcade was diminished when the two spires on top of the Arcade were removed in the 1940s or 50s.

The Acacia Mansion on the other hand has much more of an exotic, Moorish look.  It more closely resembles the buildings constructed at Krotona when it was located in Hollywood. (More about that later.)

Madeline Baird, the original owner of the Acacia Mansion, spared no expense in creating this beautiful, eclectic work of architecture. Most of the materials and decor were imported from Europe. This included terrazzo tiles, pink marble, mahogany doors, Italian lamps, etc. A particularly American feature, however, are the Ernest Batchelder tile fireplaces in the living room and master bedroom. Batchelder’s tiles, manufactured in Pasadena, were used in many of California’s finest Craftsman-style homes. 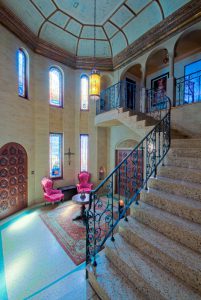 Skilled craftsmen were also imported..from Finland.  Some of the descendants of these workers still live in Meiners Oaks. One of these craftsmen was Uno-Pal Kangas, a Finnish sculptor who created a reflecting pool and a fountain for the Mansion.  During the depression, Kangas created many statues for the New Deal “Works Progress Administration.” One of his projects was the Statue of Father Serra in front of the Ventura County Courthouse (now Ventura City Hall). Kangas’ concrete statue was recently replaced with a bronze casting of the original. He lived and worked in M.O. for the rest of his life.

The owners of the house were David and Madeline Baird, who immigrated here from Canada. They commissioned the house in 1927; Mr. Baird died before the home was completed two years later in 1929.  The Bairds made their fortune in the fish industry in Nova Scotia. David was known as “The Sardine King of Canada.”

The Bairds were Theosophists who came here to be part of the new Theosophical Center Annie Besant was creating in the Ojai Valley.  Besant came to Ojai in 1926 to meet with Krishnamurti and begin purchasing property for the new center.

Annie Besant bought 200 acres across Lomita that was to be the valley’s spiritual center. Krishnamurti began holding talks in the Oak Grove in 1928. This area across the street was named Starland after the Order of the Star, Krishnamurti’s religious organization. Besant purchased 500 Acres in the Upper Ojai to be the organization’s educational center, with a Theosophical school and college. Her plan was that she would head the educational center and Krishnamurti would head the spiritual center.

Meiners Oaks was to be a community where Theosophists would live. Siete Robles was also developed as a housing tract for Theosophists. Ojai was advertised around the world for Theosophists to come and purchase lots. John Roine, the architect, advertised his services as architect and builder.  The Bairds were among the first to respond.

John Roine was the architect of the Acacia Mansion.  He, too, was a Theosophist. He immigrated to California from Finland in 1916 at the age of 39. He settled first at Krotona Hollywood, a Theosophical Colony and Educational Center, located in Hollywood. It was nestled in Beachwood Canyon–under the Hollywood Sign. He most likely began working as a construction manager and builder at Krotona Hollywood. He also was also very active in Theosophical affairs, writing articles, speaking at conventions, and serving as a liaison with the Finnish Theosophical Lodge.

As a builder at Krotona Hollywood, Roine worked under some of the most accomplished architects in Southern California. The Theosophists loved fine architecture, and they hired only the best, including.

The style of architecture at Krotona Hollywood was much like that of the Acacia Mansion… Spanish-Revival with a BIG dose of Moorish design elements. The buildings there were very exotic! One of the more beautiful buildings was named Moorcrest. It was designed by Marie Russak Hotchener, a self-educated architect who was a former opera star. Two early residents of Moorcrest were Charlie Chaplin and Mary Astor—both Theosophists working in Hollywood’s film industry.

Roine also worked on the Pilgrimage Theater in Los Angeles. On that project, he worked under the renowned architect Bernard Maybeck. Maybeck designed the Palace of Fine Arts in San Francisco and was Julia Morgan’s mentor. Julia Morgan designed the Pierpont-Ginn House here in Ojai, and Hearst Castle in San Simeon.

So, Roine learned architecture on the job, while working at Krotona Hollywood on all its magnificent, exotic buildings.

In 1922 Krishnamurti came to Ojai and established a home in the east end on McAndrew Road. He was the Theosophist’s spiritual leader at the time, so in 1924, Albert P. Warrington, the head of Krotona, moved the organization to Ojai. Warrington wanted the new Krotona buildings to match Libbey’s downtown, so the Krotona buildings in Ojai were done in a more traditional Spanish style. Robert Stacy-Judd was the architect.

John Roine followed Krotona to Ojai in 1926 and lived here full-time for about 9 years.  By then, he was a skilled architect, with an architectural office located in the Arcade. He designed and built many buildings and homes in Ojai in addition to the Acacia Mansion. 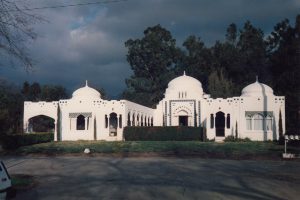 Roine moved back to Los Angeles in 1935, but he continued to visit Ojai frequently. It’s possible he came back to Ojai at the end of his life. His last known address was, ironically, the Acacias…the nursing home located across the street from Grey Gables.

2 Replies to “John Roine and the Acacia Mansion”