Two of the town’s most devastating fires occurred in 1917. The first was started by campers in the Matilija Canyon on June 16. It reportedly killed five people and burned sixty buildings, leaving many residents homeless. The Foothills Hotel was destroyed as were the Baptist and Catholic churches, Bristol School and the homes of Robertson and Van Patten on Foothill Road, and Sinclair and Farnum on Fairview Road.

On November 28 of the same year, a gasoline stove in Miss Elvie Peasley’s store in the Arcade exploded and the resulting fire burned the west half of the Arcade business district. Citizens tried to help by carrying merchandise from the stores and stacking it in the street. In their haste to save it, however, much of it was destroyed. The Arcade, itself, was not destroyed. 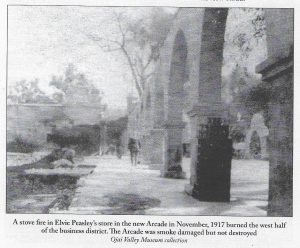 Glen Hickey, who had recently taken over the old Barrows place of business, reportedly left his hardware store open so people could get equipment with which to fight the fire. Volunteers quickly grabbed what tools they needed, tossing money into the register. Later, when Hickey counted the cash drawer, he became convince that there was more money in it than there should be. It was after these two fires that Edward Libbey, shocked into awareness of the inadequacy of the firefighters’ equipment, gave the community a fire truck.

In 1932, an eleven-day forest fire burned acres and acres of brush.

A fire, said to be the most devastating since the June 1917 fire, roared toward the Ojai Valley in 1948. Fifteen hundred firefighters fought this blaze that burned 30,000 acres and consumed thirteen homes. This fire started near the pool at Wheelers Resort when a butane pipe burst. Orchid Town and Cal Prep (the old Foothills Hotel) were just some of the properties that were badly scorched in that fire.

In 1985, fire terrorized the valley once again. This blaze, called the Wheeler Fire, started on an extremely hot July 1 and wasn’t contained until fifteen days later. Remarkably, after burning 120,000 acres, only twelve homes were lost. Numerous outbuildings burned, however, and the damage to citrus was estimated at over $300,000. More than fifty of the 3,000 firefighters who came to help were injured in this blaze. 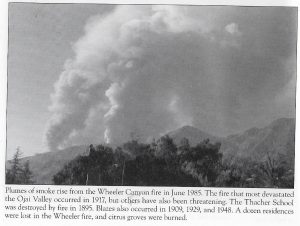 The Wheeler Fire, a suspected arson fire that started near Wheeler Hot Springs, prompted evacuations all over the valley as the fire, heightened each evening by strong, hot winds, threatened homes and property. This author was personally involved with evacuations and threats of evacuation for four nights. We evacuated friends along the Ventura River bank one night. We took in refugees from the Drown tract the next night and Siete Robles the night after that. One late night, we were awakened by neighbors in West Hills. Our homes were being bombarded by giant, glowing embers.

When the nightmare was over, grateful citizens posted large signs all over the valley offering thanks to the firemen. Later that year, a huge boulder was placed at the “Y” with a plaque honoring the firefighters.

In 2006, one of the largest fires in California history broke out in the Sespe Wilderness on Labor Day, September 4. Called the Day Fire, it burned until October 13, charring 162,702 acres. Though only eleven structures burned, ten of them outbuildings, the fire came perilously close to Upper Ojai homes and ranches, and for weeks residents were on alert.