This article was first run in the Wednesday, February 8, 1978 edition of the Ojai Valley News on Page A-12 under “Out of Bounds”. It is reprinted here with their permission.  The photo of Zaidee Soule and its caption were added by the Ojai Valley Museum.

Al Herman, long time valley resident, remembers the day back in 1962 when the Soule Park Golf Course first opened for play. “All of the big shots were there,” Herman recalled the other afternoon while looking through the pages of a scrapbook he keeps for the Soule Park Senior Men’s Golf Club. “Ken MacDonald (former supervisor and assemblyman) hit the first shot. After all the dignitaries and people like that went out in the first couple of foursomes, the rest of us got a chance to play.

“The course was beautiful. We had a great time. Of course, most of the local boys were novices. We didn’t know too much about golf. But there was a great spirit among the members of the men’s golf club that year. We used to meet with the head pro, Bill Martin, once a week for dinner and he would spin some tales. He gave us some golf tips. And he told about etiquette on the course. He used to say never, never, never pull your cart between the sand traps and the green. Ruins the grass, he would say, ruins the grass.”

GREEN FEES back then were $2 on weekdays and $2.50 on weekends. It cost a buck to play on weekdays after 4 p.m. Today, despite the fact that the green fees have doubled, the total number of rounds played each year is approaching the designed maximum of 75,000.

By all accounts, Soule Park, proclaimed “one of the best public golf courses in the world” by former golf professional Doug Sanders, has been a monumental success. But how many of those thousands and thousands of golfers who tee up at Soule Park each year know they are standing on what was once a 210 acre farm owned by the Soule family?

THE SOULE PARK Golf Course story involved a number of characters, not the least of whom were Zaidee Soule, Doug Jordan and Art Johnson. Old-timers like Al Herman knew these people well and appreciate all they did to make the golf course a reality.

It seems that Jordan, an avid golfer and local store owner, was appointed by then-Supervisor Bob Andrews to serve on a sports advisory committee for the county in the late 50s. After a number of meetings and studies, the committee recommended the creation of a county-owned golf course. But for several reasons, not the least of which was a lack of money, the supervisors turned down the suggestion.

About this time Jordan and his wife, Claudia, became good friends of Zaidee Soule, who lived with her sister on a 210-acre ranch in the heart of the Ojai Valley, property inherited from their father, and early pioneer rancher.

According to an account in the Ojai Valley News several years ago, Jordan went to Zaidee and said, “How about letting the county have it (the land) for a park?” and she replied, “Well, Doug, it would make a beautiful park and golf course.”

But nothing happened until about a year later when Zaidee walked into Jordan’s store and said, “Doug, you can have your golf course and park any time you want now.” 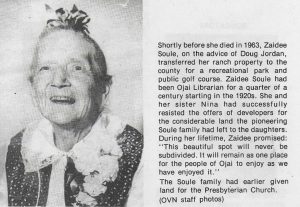 JORDAN relayed the news to Johnson, at the time the manager of the Bank of America and the President of the Rotary Club. The “man-behind-the-scene”, Johnson worked to bring the various parties, private and public, together. During the negotiations, Johnson’s enthusiasm and leadership proved instrumental in overcoming any problems that arose. Billy Bell, the famous golf course architect, was brought in to design the course. Construction began in 1961 and the course was ready to play in late spring of 1962.

Unfortunately, Johnson died shortly before the course opened. The Art Johnson Memorial Golf Tournament was started in honor a year later. The first winner of the tourney, incidentally, was OVN Editor Fred Volz.

Jordan became the first president of the Soule Park Men’s Golf Club. He later helped found the Soule Park Senior Men’s Club and served on its board until his death in 1975. Zaidee Soule died in 1962, but her portrait still hangs in the Soule Park clubhouse. Hardly a day doesn’t pass when a newcomer doesn’t look at the portrait and ask, “Who is Zaidee Soule?” And then Al Herman or another of the old-timers will have to sit them down and tell them the whole story.