Judge held court under an oak tree
by
Ed Wenig

It was in the eventful year of 1887 that James McKee, Civil War veteran, one-time school teacher, and Indiana judge, came to the Ojai Valley, expecting to regain his health in idyllic rural surroundings. The solid citizens of the community elected the frail, scholary man to be their Justice of the peace, a post which he continued to hold until his death in 1904.

It was no easy task to be a judge in pioneer days in the Ojai, when everyone knew everybody else.

One particularly knotty problem arose in the nineties when 13 exuberant men and a few boys got into trouble with the law by carrying out the old pioneer custom of surprising a newly-wed couple in the middle of the night with a “shivaree.” This consisted of surrounding the home and shooting blasts from a shotgun in the air, accompanied by unearthly yells and other noise-making. This traditional expression of good will was not appreciated by the newlyweds. In fact, they swore out complaints against all the thirteen, charging them with disturbing the peace and illegal entry.

One by one each of the 13 went to Judge McKee and pled “Not Guilty.” It is said that one of the first to arrive was Bob Clark who later became a U. S. Marshal.  John Thompson, at boy at the time, and one of the indicated, recalled being taken to Judge McKee by his father and waiting outside the Judge’s home in fear and trembling, while his father and Judge McKee had a long and friendly talk.

A Ventura lawyer, Judge Shepard, was engaged to defend all the accused. In the meantime, a large group of women in the valley planned a big dinner and social evening in anticipation of the celebration of the acquittal of all. But when the district attorney examined the evidence and circumstances, and refused to prosecute, the ladies cancelled their plans. It all ended happily for the defendants, each paying $1.75 apiece as his portion of the lawyer’s fees.

According to all who remember him, Judge McKee was a very devout and kindly man, always ready to help those who went to him for advice or for assistance in drawing up legal documents. The story is that he once risked his life to ride horseback through the swollen river to Matilija to draw up a will for a dying man.

Most of the time Judge McKee tried cases in his own home, but on warm summer days, he sometimes moved his court into his yard under a big oak tree. 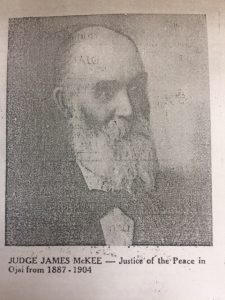