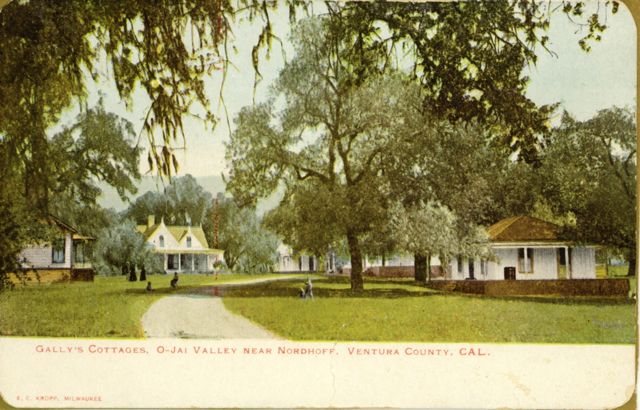 A gala occasion was celebrated in Nordhoff on Saturday, January 14, 1899, when the first golf course in the valley was opened to the public. Mrs. Mary Gally had supervised the laying out of the course north of the Gally Cottages with the help of some easterners who knew something about golf links.

The greens were patches of sand. Buckets of wet sand hung on posts at the beginning of the fairways for the use of the players in making their tees. Bunkers were made of strips of three-foot wire – netting placed on the top of one-foot ridges of earth. Burned-out hollow stumps and many squirrel holes dotted the fairways.

“Hold my caddy”
The game was a great novelty to the residents of the valley. The players on the opening day, mostly visitors from the east, were followed from hole to hole by the wondering “natives” who chattered continuously, asking the names of the various clubs, how to score, etc.

Mr. Hubby, a local authority on golf terms obligingly explained the game to the onlookers. One of Mr. Hubby’s favorite stories was that of a young lady in the east who had learned to rattle off golf terms with such authority that one golfer remarked that she must be very well posted on golf. “Oh, yes,” she replied, “I know nearly all about it except that I haven’t yet learned how to hold by caddy!”

At the close of the formal opening, refreshments of ice cream, cake and preserved ginger were served at the Gally Cottages.

Although the opening day was pronounced a great success by all who attended, the editor of THE OJAI called the attention of the valley residents to an unfortunate aftermath in the next issue of this paper. He wrote: “After the day was done the putting of greens were an offence to the landscape. The ladies wore those high-heeled shoes that left their imprints deep in the sands as a reminder that society had been at large very recently. It has taken four men all week to repair this damage. Dear people, when you play golf here will you please wear tennis shoes or shoes without heels, that the putting greens may not be put out of repair and other players out of temper and into profanity?”

Interesting Rules
Because of the particular hazards of the course the Green Committee of the newly-formed Ojai Valley Golf Club found it necessary to make additional rules to the ones laid down by the U.S. Golf Association. Some of these were:

One of Howard Gally’s childhood memories of the early days of the golf course was his mother’s indignation upon learning that her smallest son had been held by his heels and lowered into a burned-out hollow tree by a player to retrieve his ball. Today Howard says he still finds parts of long-lost golf balls in the area where the course was located. 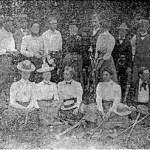 MARY GALLY – standing in the middle of the back row. In the same group are Willian Thacher and Mr. and Mrs. Harry St. Claire.