ART AND ABOUT … RARA AVIS in our midst by Anca Colbert 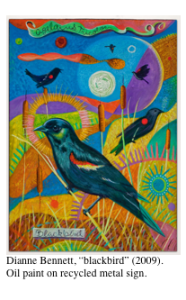 Have you heard the song of the red-winged blackbirds in this valley?

Years ago, walking along the soggy shores of Lake Casitas, I discovered where they gathered in the reeds, perched on tall cattails. They have enchanted me ever since with their melodic whistling and modulated thrills. Blue and grey herons, white egrets, bright black crows, hawks, peregrine falcons, mourning doves, flocks of quail abound at the lake and visit the Ojai Meadows Preserve, which the Ojai Valley Land Conservancy has restored and maintains as an ecological safe haven. (The latest count states there are 174 species of birds at the Meadows!)

What about those spirited hummingbirds, those flying jewels, tiny lightning bolts, dashing up, down, sideways and even backwards, coming to a sudden stop, hovering and looking at you, suspended in thin air, apparently motionless while their wings beat on average 60 times per second? These acrobats are a daily miracle in our lives.

Since ancient times birds have inspired people and artists. Messengers of the gods, their flight or song were “signs” interpreted as either good or bad omens sent from a higher source. Had Caesar listened to the augurs about those Ides of March, he might not have walked into the Capitol that fated day in Rome. In cultures around the world, from the Greeks and the Egyptians to the Aztecs and the Zulus, these divine winged messengers were revered through art and rich myths.

This is about two artists whose works I love, and the very different birds which inspired them. 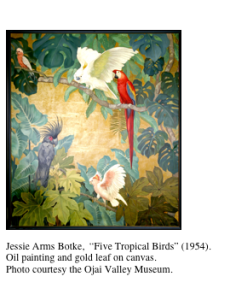 These â€œrare birdsâ€ are indeed treasures in our midst: two large paintings of magnificent, tropical birds by Jessie Arms Botke (on display at the Ojai Valley Museum) and two small retablos of modest, local birds by Dianne Bennett (at the Beatrice Wood Center for the Arts).

The distinctive art and accomplished careers of Cornelis and Jessica Arms Botke have long been known far beyond Ventura County, where they lived and had their studio most of their lives. Originally from Chicago, the couple moved to Santa Paula in 1929. They worked together on numerous commissions (some grace public spaces in Santa Paula and Ventura), but had different styles, which they continued to develop separately. Cornelis (1887-1954) was a refined printmaker, a skilled draftsman keen on attention to details. Jessie (1883-1971) became famous for painting exotic birds, with a predilection for white peacocks (the Botkes kept an aviary and peacocks roamed their large property in Wheeler Gorge). Her splendid skills as a designer and a colorist made her style famous: detailed renditions of elegant, rare birds set against luxuriant foliage in rich, dazzling colors with spectacular use of gold leaf backgrounds. She painted large and bold. Jessie’s works were widely exhibited and collected in Los Angeles, Chicago and New York. Her career was as brilliant as her painting.

In 1954, Frank Keenan, owner of Ojai’s Oaks Hotel, commissioned Jessie Arms Botke to paint an entire wall for the hotel barroom. Botke responded: “I have an idea for a really stunning design, cockatoos, macaws, parrots and parakeets in a mass of rich tropical leaves, the sky spots in pale gold leaf.” In the 1970s the mural was purchased by Sara Bayless and removed from the Oaks in sections. In 1993 she donated it to the Ojai Museum, where (after restoration) it is now on permanent display. The Michelin Guide would say: “Worth a detour!” I encourage you to go discover these treasures, and read about their unusual history. (David Mason, Ojai historian, wrote the curatorial notes at the museum, which provided precious information for this story.)

Botke painted large-scale compositions of regal elegance, refined decorative canvases and murals often showing groups of birds in decidedly elegant repose. Her feathered subjects keep a certain distance from her and from the viewer: a splendid, seductive detachment.

Dianne Bennett’s paintings of birds are often small to tiny in scale, and use metal signs and other rescued materials as support. Her focus is mostly on an individual subject and on more humble, common birds, but she is expressing their singular nature. These birds sit up close and intimate with the painter and the viewer. They speak to us in a direct, primitive, soulful language. 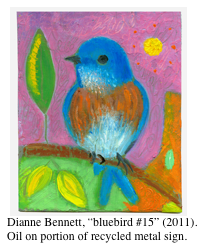 birds. “When I was growing up, my father always kept bird feeders off the back porch so I have been tuned into songbirds since I was a child. When I see a bird, I experience a sense of freedom and pure joy.” “They are wildlife in our midst and witnesses to our madness. I have read that songbird numbers are decreasing due to global climate change, loss of habitat, feral cats, acid rain…. So I see birds as winged messengers reminding us to be conscious of our actions and how they affect our planet.”

Bennett’s works are currently exhibited in two local shows: “hear + now” at the Beatrice Wood Center for the Arts in Ojai (through June 29) and “one time one place” at the Museum of Ventura County in Ventura (June 9 to August 19).

Both Botke and Bennett show profound love and respect for their feathered subjects. Whether silent and motionless or singing and in full flight, the sentiment is one of reverence by the painter for her “sitters.”

As birds fly through space, they draw lines, circles, spirals; they create a visual reality in the air, just as their songs and calls make music that punctuates the silence. Space and silence. How these are defined, by their presence or their absence, is at the core of every painter’s gesture, every musician’s note, every poet’s word. Do birds have any choice in these matters? Of course not. Do artists? Most of the great ones feel driven by the inner necessity of a creative force, a mysterious spirit which flows through them and guides their hand. The old Chinese proverb got it right: “A bird does not sing because it has an answer. It sings because it has a song.”