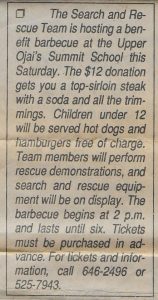 2 Replies to “Volunteer team is dedicated to helping Valley neighbors”