Note: Howard Bald was an early Ojai resident.  His reminiscences were written in the early 1970s. 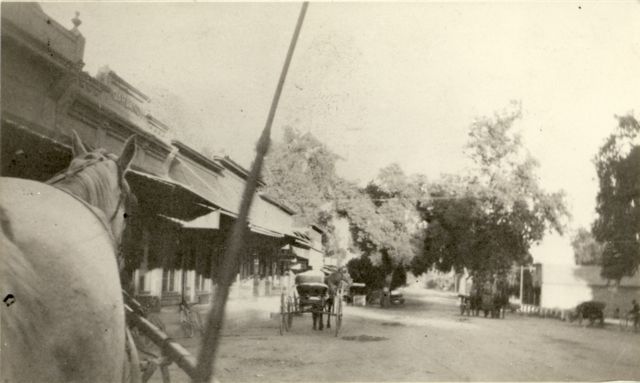 The Ojai Valley in those days was a popular winter resort for wealthy eastern people who would come out for the winter.

Other than playing tennis and cards, about the only entertainment was horseback riding, and for the elder people, a team and surrey with a driver would trot them about the valley, up Matilija Canyon (the road ended at Wheeler’s Hot Springs) up through the Upper Ojai valley and onto Sulphur mountain, or over to Shepherds Inn via Casitas Pass and sometimes on to Santa Barbara. Shepherd’s Inn, situated on the line between Santa Barbara and Ventura County was a popular, rustic inn frequented by both Santa Barbara and Ojai tourists.

The Casitas Pass was approached only via what is now Foster Park, and the road followed along the foot of the north side of Red mountain. But the east and west passes were virtually the same as of today. One popular ride was to follow the beach from the Rincon to Ventura when the tide was low. I believe it was sometimes done with team and wagon. I did it only on saddle horse.

The livery stable was not only the site of horse trading and training, but also some lively prize fights were held there, sometimes right out on the street and sometimes in the stable. When held inside buggies would be crammed into a corner to make room for the spectators. Some of the younger fry had their first lessons in boxing there.

I well remember one time when the men had Mayor Smith and me matched together. We were fairly evenly matched and things were going smoothly until Mayor glanced over his shoulder to see how near he was to a horse’s heels in a nearby stall. At that instant I uncorked a left to Mayor’s jaw. Mayor considered that unfair tactics and retaliated with all he had. The riot was quelled by Sam (Mayor’s father) dragging him across the street to their home back of the post office.

Occasionally the village quietness was broken by a local hoodlum riding his horse down the boardwalk, and if a Chinaman happened to be within reach, wrapping the end of his cue around the pommel of his saddle and galloping to the the end of the boardwalk. (The Chinese all wore a long single braid down their back. I’ll mention them in particular later.)

One smart alec rode into Clyde Stewart’s grocery store and roped a fellow and dragged him over the counter. But that episode is getting into the second decade and I am trying to confine myself to the first decade. And besides, that smart alec (notice I don’t use the term hoodlum) was myself.

One November night the village stillness was suddenly shattered by a series of pistol shots accompanied by unearthly yells. It turned out to be only Johnny Joshlin celebrating the beginning of the fall rains. After emptying two six-shooters, he returned to Lagomarsino’s saloon and all was quiet again. Now I wonder how Johnny happed to have two six-shooters, for he was not a gunman.

The only law enforcement officer the valley had was constable Andy Van Curren. He was a familiar sight with his flowing gray beard, riding about the valley on an iron gray horse.

His home and the jail (they were separate buildings) occupied the area where the new Security Pacific Bank [Bank of America] and Loops restaurant [Cattywampus and Beacon Coffee] now stand.  [See Ojai’s First Jail, by Ed Wenig]

I don’t remember there ever being anything in the jail but spare coffins, for Andy sometimes acted as undertaker. I am sure that on such occasions he substituted the gray saddle horse for a team and spring wagon. (I have recently learned, though, that Mrs. Van Curren would prepare meals, and one of the small daughters would carry them over to the inmates.)

There was story of one of the valley’s most notorious rowdies (I will not mention his name, as it might offend highly respected present day descendents). His appearances before justice of the peace McKee were becoming rather frequent, and each time the fine would be a little higher. Finally, the judge fined him $10. The fellow blinked and with characteristic oath said, “Judge, ain’t that pretty steep for a regular customer?”

Another time Constable Van Curren called at his home to make an arrest. His mother met Van Curren at the front door and parlayed with him while the intended arrestee skipped out the kitchen door, saddled and mounted a horse, and rode off to the Upper Ojai.

One Reply to “Early Stories of Ojai, Part I”