The following story is from Walter W. Bristol’s 1946 book, “THE STORY OF THE OJAI VALLEY”. Therefore, it is assumed that Bristol is the author.

This famous school began in 1889 under the direction of Sherman D. Thacher. The location of the school is fortunate—far enough from the town to exclude its concerns and adjacent to mountains, hills and canyons which stimulate interest in riding, hiking, camping, and other out-of-doors activities, which the school capitalized to the fullest extent. This fact led in time to the unique requirement that each boy own and care for a horse. 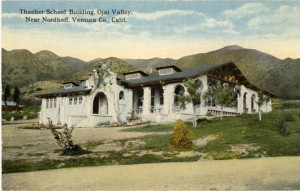 The scholastic requirements are high and each student must stand on his own abilities, since Mr. Thacher refused the privilege of the accredited system in force in the California Universities, substituting instead the College Board examinations.

The Commencement exercises in the Thacher Bowl are most interesting and attract capacity audiences.

Wm. L. Thacher came to the valley in 1895 and became the Associate Headmaster. Upon the death of Sherman Thacher in 1931, Morgan Barnes succeeded, and in 1936 Anson S. Thacher became Headmaster.

The school was incorporated in 1924. For many years the limit of students at the school was placed at sixty. Ignoring parental pressure and an increased revenue Mr. Thacher preferred quality to quantity. Of late years provision has been made for an increase of fifteen students.

At the Presbyterian Church on March 20, 1939, the Fiftieth Anniversary Memorial Service was held. Morgan Barnes, who came especially from his home in Pennsylvania, presided. Men prominent in the educational field from different parts of the country participated in the significant event both at the church and at the school during the year. Among them were:

It is interesting to note that in the 57 years of the school’s history 1103 students have passed through its portals. A score of more of the alumni have attained distinction in education and administration, and two outstanding in literature, viz; Thornton Wilder, twice-winner of the Pulitzer Prize and Charles B. Nordhoff, co-author of “Mutiny on the Bounty” and other works. [Charles B. Nordhoff was the grandson of Charles Nordhoff for whom Ojai was originally named.]

2 Replies to “THE THACHER SCHOOL”