Beatrice Wood was a ceramicist, who lived in the Ojai Valley for fifty years. During the First World War, she made what was to be a lifetime acquaintance with Marcel Duchamp. He was a leader of New York Dada, and a pivotal figure in the history of modern art. He was also the painter of Nude Descending a Staircase, which was such a scandalous success at the Armory Show in 1913. Beatrice Wood, at the same time, was an accomplished artist on her own merits, as a ceramicist and author, an actress and dancer, who also drew compelling line drawings.
Beatrice was born in San Francisco on March 3, 1893; but by 1900 was in Paris, attending a convent school, about which she retained pleasant memories. “I learned to read French before I learned to read English,” she recalled. She received an excellent education at the Ely School in New York City and the Shipley School at Bryn Mawr, Pennsylvania. She studied drawing at the Julien Academy in Paris and also attended the Finch School in New York City. After all this education, she announced that she wished to live a “bohemian life of an artist and paint in Paris.”
Paris was an exciting place to be. She attended the riotous premiere of the Ballet Russe production of Le sacre du printemps. She then joined the French National Repertory Company in New York City, where she appeared in over sixty parts. It was about this time, in 1916, that she met the composer Edgard Varese, who introduced her to Marcel Duchamp and other members of the New York Dada group.
Duchamp encouraged her to draw, and she produced impressive line drawings. One of the drawings was of a stick figure, thumbing its nose as it strode along. It was used for a poster to advertise a Blindman’s Ball. The jaunty figure followed her till the end of her days.
Beatrice’s life changed in the 1920s when she became a member of the Theosophical Society, which she joined in 1923. It was this interest which first brought her to the Ojai Valley. Jiddu Krishnamurti, the Indian philosopher and teacher, at the time associated with the Theosophical Society, was rapidly gaining worldwide attention; and he selected the Ojai Valley as a location for his teaching in the United States. Beatrice Wood came to the valley to attend his first “Star Camp” meeting in 1928.
Beatrice led folk dances at the Star Camp. She had danced professionally in Europe and received lessons from Ivan Clustine, the choreographer for the great ballet dancer Ana Pavlova. Beatrice’s demonstration of her mastery of the dances taught to her by Clustine was performed in the presence of the renown dancer Vaslav Nijinsky. Beatrice was also an acquaintance of the famous dancer Isadora Duncan.
Beatrice developed an interest in ceramics in 1928. She wanted to produce a teapot to match some “luster” plates she had purchased in Holland. “Luster” refers to a metallic finish, simulating silver or gold. The project was more extensive than she thought, and in time she found herself successfully in the profession of a ceramicist. Her works were exhibited at the Metropolitan Museum of Art in New York City as early as 1940.
Her workshop and home, located in the San Fernando Valley, were destroyed by a flood in 1938. Ten years later, she moved to the Ojai Valley, where she settled on March 3, 1948 (her birthday). The nearby Happy Valley School, with a founding board of directors which included Aldous Huxley, Krishnamurti and Annie Besant, attracted her attention. She was associated with the Happy Valley Foundation for the rest of her life. 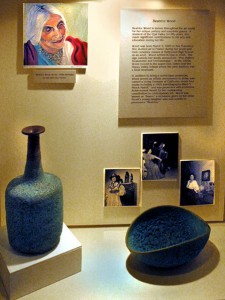 Her ceramic work then entered what has been described as “a mature expression of her luster glazing technique.” She didn’t think of herself as a chemist, but she was very methodical about testing different chemical formulas for glazes. She also worked with Otto and Vivika Heino, who where themselves noted ceramicists.
Another great change occurred in her life, when she was selected as a “Goodwill Ambassador” to India by the U.S. government in 1961. She visited India, where her works were exhibited in fourteen Indian cities. She also took up the cause of promoting India’s traditional handicrafts. Before long, she took to wearing Indian saris and heavy and abundant Indian necklaces and bracelets. Her appearance was striking, but her explanation was simply that the saris were very comfortable.
During the final three decades of her life, her works were exhibited in galleries and museums around the world. Her book, The Angel Wore Black Tights, was published in 1982. Her autobiography, I Shock Myself, was published in 1985. She received a variety of awards from universities and arts councils. A documentary about her life, Mama of Dada, was shown on public television in 1995.
One of her great achievements was her longevity. Her 90th birthday was celebrated in Los Angeles in 1983 with a Dada Ball. Her 100th birthday was celebrated in 1993; and even through these final years, she was still creatively productive. On March 3, 1998, she celebrated her 105th birthday. She died at her home in the upper Ojai Valley a little over a week later on March 12, 1998.