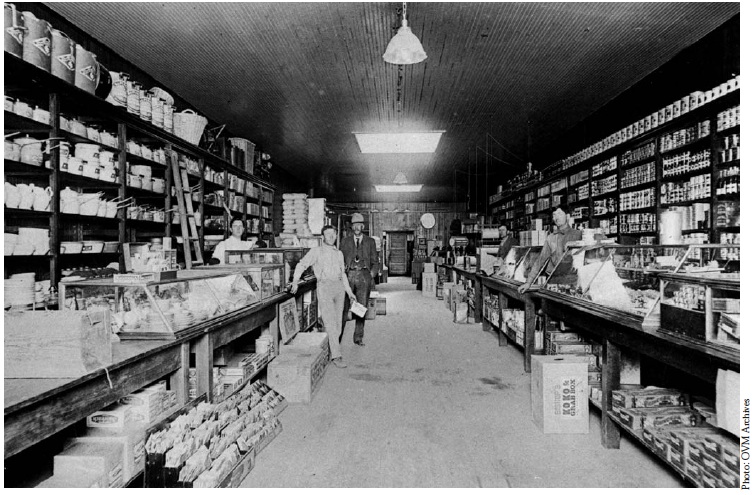 Clyde Stewart opened a store at the center of the village of Nordhoff in 1910, and his business was listed in the telephone book that year. An advertisement, carried in The Ojai newspaper in 1917 read:

In this photograph, we see Stewart with his staff of clerks. The array of goods on display is typical of most of the grocery and general merchandise stores of the day. Packets of seeds rest in racks on the floor to the left of the aisle. Pots and pans are on the shelves above. At the rear, a large clock hangs on the wall.

Note the sky lights at the center of the ceiling. Those same sky lights can be seen today at Vesta Home & Hearth (previously Tottingham Court).

Howard Bald wrote of an incident that occurred at Clyde Stewart’s store about 1910:

About this time, “one smart aleck rode into Clyde Stewart’s grocery store (on a horse) and roped a fellow and dragged him over the counter…that smart aleck…was myself.”

Howard was only eighteen years old at the time. His behavior must have created quite a stir.

Clyde Stewart ran for and won the office of City Clerk for the newly incorporated City of Ojai in 1921, becoming the first in the city to hold that office. He was later active in theÂ Ojai Orange Association and was secretary of the Association in 1934. He owned a ranch on McNell Road.