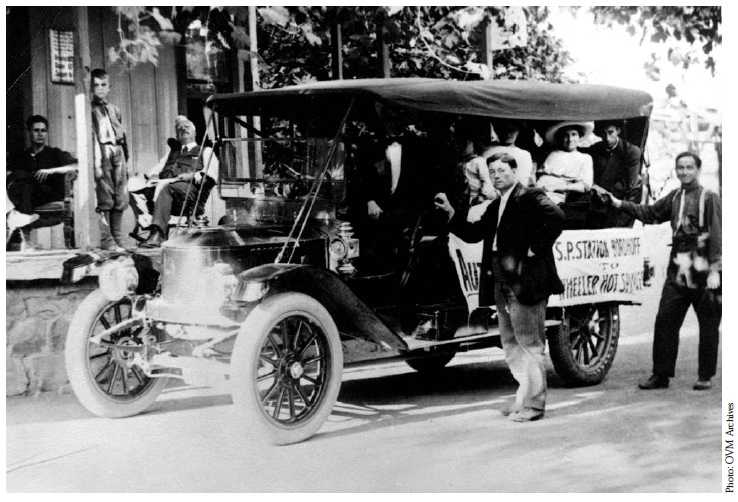 Wheeler Blumberg homesteaded property in Matilija Canyon in 1888, and he constructed an access road. He then opened his Hot Springs to the public in 1891, offering a hotel with dancing pavilion, a swimming pool, a briskly running stream, fishing and great scenery.

Travel from the village of Nordhoff to the popular resort was provided by horse-drawn coaches of all types, large and small, carriages, tally-hoes, etc.

Visitors would arrive in the valley by railroad and then be taken to Wheeler’s along a pleasant scenic route. However, after 1900 interest turned to mechanized travel, andÂ auto stages were introduced.

The resort came into the possession of Webb Wilcox after Wheeler Blumberg’s death in 1907. Wilcox had married Wheeler’s daughter, Etta, in 1905, so Wilcox was Wheeler’s son-in-law. The resort thrived under Wilcox’s management, and he continued to manage it until 1935. By 1924, Wilcox was offering auto transportation for the entire distance between Los Angeles and the resort.

In this photograph, an autobus is clearly marked “S.P. Station, Nordhoff, to Wheeler’s Hot Springs.” Guests have been seated, and the driver is ready to embark from the village to the resort. When the weather permitted, the top of the autobus could be removed, and passengers would ride in the open air.