The Nordhoff Rangers By Ed Wenig, published in the Ojai Valley News on June 10, 1970 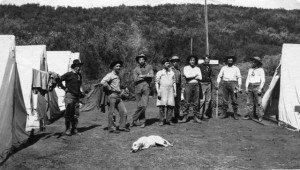 The term “Nordhoff Rangers” today evokes thoughts of high school football teams and athletic events in the minds of Ojai residents. But in the early days of the valley, the original Nordhoff Rangers were an integral part of the adult life of the community, ringing security and, at the same time, a sort of excitement to the lives of the townsfolk. To visiting easterners at the turn of the century the Nordhoff Rangers seemed the last remaining vestige of the Old West.

It was necessary for a Ranger to have two horses in order to carry on his work. One was for riding, while the other carried provisions and fire-fighting gear. In those days shovels, machetes, and barley sacks for beating out the flames in grass fires were standard equipment.

Days or weeks later the horses and their mounts would return, dead tired, for a brief respite from their duties. On occasion the one-block-long main street of the village would be filled with Rangers and their horses preparing to leave for the vast area north of the Ojai, or coming home from the forest.

A report to the government by Ranger James Larmer describes a somewhat typical event in a forest ranger’s life thus: “April 7, 1899. Went to Wheeler’s Hot Springs in the north fork of Matilija Canyon. While there received a message from Supervisor Slosson that fire was burning in Cozy Dell Canyon. Went there with four men. Put out fire by 8 a.m. on 8th. Worked all night. Rode 40 miles.”

Among the more famous of Nordhoff’s forest rangers was Jacinto Reyes, who was with the forest service for 31 years. As forest policeman Jacinto Reyes conscripted homesteaders to pout out forest fires, settled quarrels between cattle and sheep men, and packed out bodies of men who had perished in the mountains.

Sol Sheridan, Ventura County historian, wrote, “Jacinto Reyes is known as one of the most efficient Rangers in the service, a man whose fame has traveled far-fearlessly shirking no responsibility and stopping at nothing to protect the farmer of the valley by his intelligent devotion to the conservation of the forest growth of the mountains.”

In 1901 Jacinto Reyes was honored by being part of the escort for President McKinley’s carriage in Ventura. However, “J.D.”, as Jacinto was affectionately called, received his biggest thrill in 1905 in Santa Barbara, when President Theodore Roosevelt asked him to ride on the right side of his carriage.

(Shortly after Nordhoff High School opened in 1909, the students adopted the Nordhoff Ranger as their school mascot.)