The Ojai Storytelling Festival featured Bil Lepp in 2004. Bil Lepp started writing and telling tales in 1990 when he first took part in the West Virginia Liars Contest. Since that time he has won five “Biggest Liar” titles. A national authority on Appalachian humor, Bil, his wife Paula, son Jonah, and dog, Buck, reside in West Virginia.. “With Lepp, the sorry, low-down lie becomes a grand and glorious creation, a verbal sculpture in which a hundred small fibs, stretchers, falsehoods and prevarications are piled together, shaped and molded into one stunning, awe-inspiring cathedral of flapdoodle and bull.” -Duke Divinity Magazine- Bob Wells. At the 2004 festival, Bil Lepp premiered a story that was crafted in Ojai. Here’s how the story came to be: 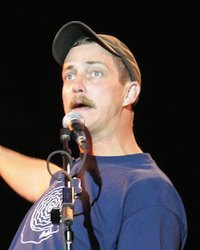 “The ‘Ojai Lion’ comes directly from my experiences at the Ojai Storytelling Festival in 2004. I was staying with Trent & Olga Jones. They are lovely people and I enjoyed their hospitality greatly. Anyway, I really did go for a hike, and I really did see the warning signs for mountain lions. In order to be better prepared for an encounter I picked up a sharp rock, thinking, ‘I’ll just bash in the head of any cat that attacks.’ But then I got to thinking that that wasn’t very nice, so I started exploring non-violent ways to resolve any potential lion encounters. This story is the result and by the way, I still have not seen a lion in the wild.” – Bil Lep

I was out in California for the Ojai Village of Tales Storytelling Festival a few years ago, and I was staying in a little cabin which was right down the road from a bunch of public land. The land had been turned into a park, complete with hiking trails. I got up one morning and decided to take a hike down to the Ventura river, which bordered the park.

In the parking area there was that ubiquitous park information board, replete with notices and warnings. In the middle of the of the board was an 8×10 printout with a color photo of a very ferocious mountain lion on it. Above the photo, in large letters, were the words, “WARNING: MOUNTAIN LIONS HAVE BEEN SPOTTED IN THIS AREA.” The notice went on to describe what you should do if you encountered a mountain lion. The sign said:

1) Try to look as big as possible.
2) Back away as quietly as possible
3) If the mountain lion attacks, (and I thought this part was particularly prudent) fight back.

We don’t have mountain lions in West Virginia. I had never seen a mountain lion in the wild. I thought the idea of encountering a mountain lion was more a precursor to an adventure, than a warning. So, I started hiking. Before long, I came around a curve in the path and there, standing in the middle of the path, its fangs glistening, its claws bared, was the biggest, meanest, ugliest chipmunk I had ever seen. But, standing in front of the chipmunk, its fangs glistening, its claws bared, was the biggest, meanest, ugliest mountain lion I had ever seen. They both shifted to get a better look at me, and, to be honest, I think they were both happy to see me. The chipmunk was happy because he was no longer on the breakfast menu, and the mountain lion was happy because he was about to get a lot more breakfast than he had anticipated. The chipmunk shot off into the underbrush, and suddenly there was nothing but sunlight and hunger between me and that mountain lion. He crouched down and got ready to spring at me. 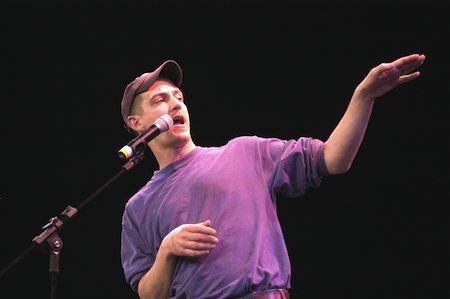 I had read the sign the about what to do if you encounter a mountain lion not a quarter of an hour ago, but I could not, for the life of me, remember what I was supposed to do. And then it came to me, 1) Try to look as big as possible.

I stand about six-foot one, but I only weigh a little more than a Christmas goose. There is not that much “big” about me.

Furthermore, looking big seemed counterproductive in this situation. I wanted to look scrawny, gristly, and otherwise unhearty. To that end, I turned sideways and lifted my t-shirt. I sucked in my gut to show off my ribs. I wanted that lion to think of me as the breakfast equivalent of a Poptart. I was standing there in the desert sun, trying to look like a stale, pre-wrapped pastry. As it turns out, that lion was interested in just such a meal. He crouched lower and got ready to lunge.

It was too late to, 2) Back away as quietly as possible. It was too late to runaway as loudly as possible. I was going to have to 3) fight back. I was wracking my brain trying to figure out how to fight a mountain lion. I had never fought a mountain lion before. I had never even thought about fighting a mountain lion before. The only experience I had ever had fighting lions was reading about Tarzan in Edgar Rice Burroughs novels. Tarzan, when faced with a lion, crouches down, puts his arms out, and, when the lion springs, Tarzan gets under the lions front legs, turns the cat around, puts it in a full nelson, and renders the beast unconscious. It wasn’t much, but it was all I had. I crouched down.

The mountain lion sprang at me. I ducked his claws, got under his legs, turned him around, and put him in the full nelson. I think it is safe to say that that mountain lion was pretty angry, but he was a lot more embarrassed than he was angry. I mean, imagine walking into you kitchen one morning and a Poptart jumps up out of the toaster, puts you in a full nelson, and pile drives you into the linoleum. It did not help matters that there was a chipmunk standing beside the trail shaking his paw and saying, “Na, na, na, na, na, na.”

I was exerting as much force as I could muster, but I simply was not powerful enough to knock that cat out. The lion was growing steadily less and less embarrassed, and more and more angry. I had to think of something quick.

I was just about start praying when I remembered that I had served as a pastor for four years. I decided that the best thing to do in this situation was to preach to that mountain lion. I knew from roughly 200 Sundays in the pulpit that if I preached to that lion, one of two things was bound to happen. I would either save him, or put him to sleep. Both options appealed to me. I started with Goliath, moved to Daniel, and was just getting around to Nero when the lion nodded off. Even asleep, the lion still posed certain problems. I was afraid that if I simply put him down, he would wake up, still mad and still hungry. Furthermore, I was concerned for the lion’s soul. He had, after all, only had about five minutes of the Word. He was in a very fragile theological condition. I was worried that if I just lay him down, well, I was in California. Who knew who the next person down the path was going to be? It could have been a Unitarian or something. I just couldn’t have that on my conscience.

I decided that I was going to have to baptize that mountain lion.

Aside from the theological benefits of baptizing the lion, there were certain tactical advantages as well. I knew from my pastoral experiences that when you baptize someone, you almost never see them again, except maybe at Easter and Christmas, but I didn’t plan on being in California for Easter or Christmas.

The Ventura river was only about a hundred yards behind me so I started to cautiously back toward the river. I was happy to find that, though often dry, the Ventura river had just enough water for a baptizing. I stood on the bank and pondered for a moment. Just what is the best way to baptize a mountain lion? We hadn’t covered that in divinity school. I’m a Methodist, and thus our means of baptism is to sprinkle water on the supplicants head. But, I wasn’t sure the mountain lion was a Methodist. I figured that anybody who got converted as fast as that mountain lion did almost had to be a Baptist. I was going to have to go for the full-bull dunking. Of course, if he was a Baptist I was in trouble because that meant that after the service, he was going to be ready to eat.

I slipped into the water, said the words you say, and them, BAM, I dunked him. When we came up out of the water, that mountain lion was angrier than he had been all day. He didn’t seem at all like someone who had just experienced the Peace of Christ in his life. And then I remembered that the mountain lion was a cat. Cats have nine lives, which likely means they have nine souls, which meant I was going to have to baptize that cat eight more times!

We came out of the water after the seventh dunking and I noticed a figure standing on the shore. It was an angelic figure, with flowing hair, and sunlight dappling through the hair, creating sort of a halo above the figure’s head. And then, I heard a most evangelic voice which said, “Unhand that mountain lion!”

The figure turned and I could see that it was a woman. And I could see that she was wearing the uniform of a member of the California Department of Natural Wildlife Protection. The officer pulled a wallet from her pocket and flipped it open. The wallet contained a badge, and about sixteen little plastic card holders hung from the case. The holders contained various membership cards for organizations to which this officer belonged. The cards included her People for the Non-Proliferation of Human Religions Among Animals card, her Vegans Anonymous card, her Herbal Tea Drinkers of America card, her Down With Manifest Destiny card, her National Storytelling Network card and, way at the bottom, in the last slot, were some ashes which, I’m pretty sure, were from the bra she burned in 1968.

She said, “Don’t you know that it is illegal in California to push your religion on a wild animal?!” I said, “Officer, I don’t think you fully grasp the circumstances under which this cat and I became engaged.” “I want you,”she continued, “to release that mountain lion into my protective custody at this moment!” The lion stiffened. He slowly turned his head toward me and said, “Good Lord! Don’t let her protect me!” The lion and I worked a quick deal I let him go and he ran one way while I ran the other.

There really isn’t an end to this story, except to say that if you are out in California, and you do meet a mountain lion, if all else fails, you may just want to ask him if he is a Christian.

The “Ojai Lion” has been told at the National Storytelling Festival and at other festivals around the country.