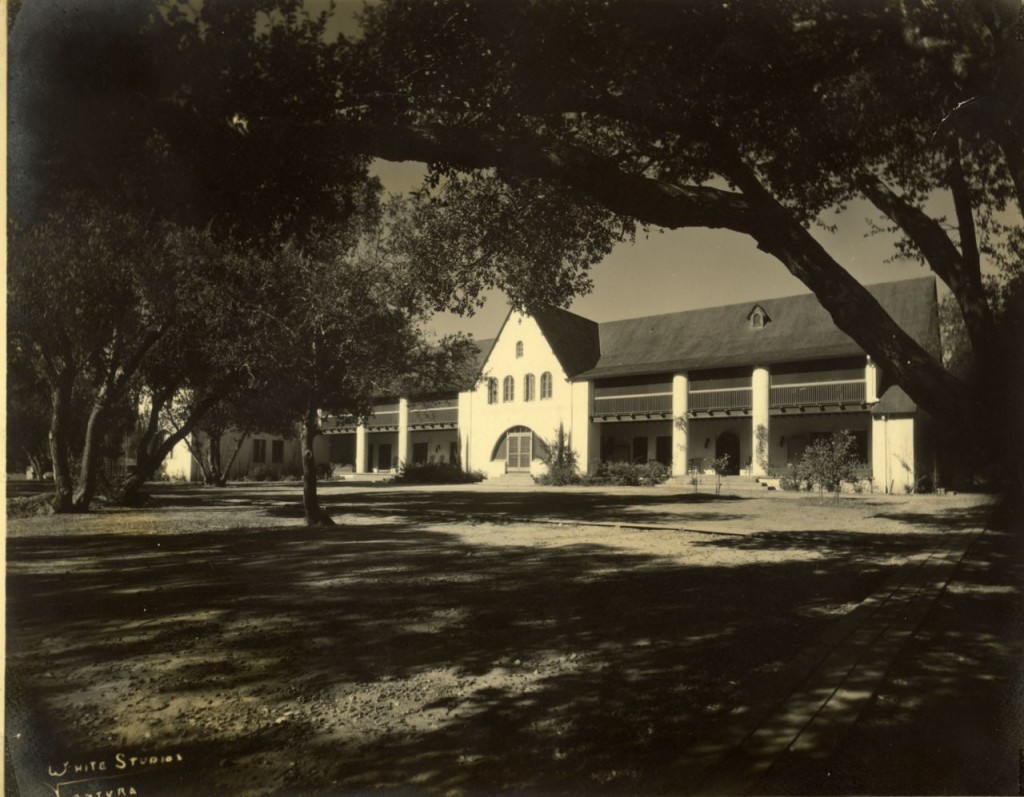 “[The Ojai Valley School] So far it has proven very successful, combining as it
does the most intelligent educational methods of the best city schools and the
beautiful and healthful environment of the Ojai.” –Country Life Magazine, September 1924

During 1909, Walter W. Bristol organized the Nordhoff Union High School in the town of Nordhoff, now Ojai, and became the school’s first principal.

He held that position until 1919, when he resigned to assist his wife in the running of a small country school that she was operating, known as the Bristol School.

Mrs. Bristol’s school had started in the fall of 1912, with two students. Classes were held in her home on the northwest corner of Ojai Avenue and Bristol Road. The house had been built in 1911, and it was typical wooden construction with a screened-in sleeping porch that ran across one end.

By 1913, the sleeping porch had been divided into classrooms and desks were installed, so as to accommodate more pupils.

The need for a progressive private school was very much in evidence in the small western town.

Before long, a separate school building was erected farther north on their property. The Bristols felt that their new building would probably accommodate up to 15 pupils, but before long that total had reached 25 pupils. It was indeed a crowded little school.

The great forest fire of 1917, which had burned the Foothills Hotel and 60 other building in the Ojai Valley, also destroyed the charming little Bristol School. The fire, however, did not burn the cottages that were on the same property, so classes continued. The Bristols had been asked to board students at the their school, but there had not been enough room. Now that the building was to be rebuilt, they made plans to include rooms for boarding students and three classrooms. It was a very successful school. The outdoor life in a superb winter climate and amidst charming scenery made the school life both wholesome and attractive.

Another person who had a profound interest in the local children’s education was Edward Yeomans. Arriving in the valley for the winter of 1912, Yeomans was not happy about coming to California from his home in the east. He was working for the family business, Yeomans Brothers Co., a water pump manufacturing company, and his feelings about California were that it was merely a vacation spot for rich bankers with whom he had absolutely nothing in common. However, the beauty of the Ojai Valley and the simplicity of life here convinced him that he could find no better place in which to spend the winter.

Yeomans wrote to his friends in the east: “I felt this valley to be the most beautiful spot in the world. Fruit orchards and their blossoms, and the entire 15 miles from Ventura to Ojai, not a house visible! They valley itself was fully planted in orange groves, or left as God made it; acres of live oak trees and acres of wild wheat growing under the live oaks awaiting harvesting. Olive and fig trees line all roads and mark the divisions of property.”

Deciding to stay in the Ojai Valley, Yeomans resigned his position at the family-owned company. His desire to start a school of a progressive nature took full charge of his thinking. He had found the perfect spot for his new school, the Ojai Valley, a place he had grown to love. A valley “completely unspoiled by man — nature so generously holding her beauty and rich gifts for man’s careful husbanding on so vast a scale that man was rarely visible.”

A meeting of the prominent local residents was called to discuss the plans of Yeomans’ new school. A name was decided upon, the Ojai Valley School, and it would need to have beautiful buildings in order to be a credit to the community.

Mary Bard, the wife of Senator Thomas Bard, attended the school meetings, and she was the most enthusiastic person there. Mary Bard had married the senator in 1878, and they had seven children. It was not surprising that she was interested in education.

When asked what type of school Yeomans was interested in starting, he responded, “A school whose main subjects are music, nature study and shop work. No languages for little children and no English grammar taught to them. No arithmetic at first, except what we need for work in construction. No desks fastened to floors, just desks that could easily be moved for acting of ballads or poetry. No examinations, no discipline for its own sake, but inner control, and consideration for all working in the school, and so, good citizenship.”

Mary Bard was much stirred and inspired by Yeomans’ talk and said she wanted to do whatever she could in order to help start such a school. Frank Frost, another valley resident, also wanted to do his share of work toward the new school.

E. D. Libbey, Ojai’s greatest benefactor, had just subdivided a large tract of land and had named it the Arbolada; and Frost felt that the lots in the subdivision would sell more rapidly if there were a school nearby. Frost wrote to Libbey in Toledo, Ohio and said, “You never can sell your land unless you can also say there is a good school nearby.” It was just the right message. Libbey donated a parcel of land to the group with only one restriction. They could have any amount of land they required, but it had to remain in the ownership of Libbey until three years had passed and the school had succeeded. The Ojai Valley School officially opened for business in October 1923.

With so many students requesting to attend the new school and wanting to be boarding students, Frost decided that to do his part, he would build a dormitory for the school. He supervised the building, which originally would hold 30 students, and it was filled to capacity the first day.

Yeomans wrote to Mrs. Gudrun Thorne-Thomsen to see if she could be persuaded to leave the Francis Parker School of Chicago and come to the Ojai Valley and be principal of the new school. Thorne-Thomsen accepted the position and arrived in the valley, only to be sick most of the first year; so it was up to Yeomans to be in charge during that time. He thought of himself more in the capacity of janitor rather that principal. He felt that “a school and its faculty are not a group working together for the benefit of the school on equal footing always, the school has no power of growth.”

As word spread up and down the state about this new school and the progressive learning that was taught there, people became anxious to hear all they could about it. Invited to speak at a large function in Los Angeles, Yeomans found himself extremely nervous in front of the crowd of people. Once he had spoken a few words, in which he referred to himself “as a pump manufacturer, not an educator,” he became at ease. He said he “was there as a rebel against his own painful and unhappy education in childhood, where fear ruled his entire life and school was a prison.” At that time he had promised himself when he grew up, he would try to save other children from such an unhappy life.

Libbey advertised the new school in his sales brochures for his Arbolada lots. “In this lovely sport, far away from the noise and crowding of city schools, children are given a superior training” and a far finer appreciation of life. The purpose of the school is “to cherish and develop the individuality of each pupil rather than to turn out a rubber stamp product.” This proved to be a successful move for both.

2 Replies to “The Ojai Valley School”