The following article was written by Harriet Wenig for the “Ojai Valley News’s” OJAI GOLDEN ANNIVERSARY – 1921 TO 1971 celebratory booklet (page 4). It is reprinted here with the permission of the Ojai Valley News.

The story of the man who transformed Ojai

The post office tower, the arcade, the park with its tennis courts and festival bowl, the tranquil Arbolada residential district — these distinguish the village of Ojai from countless other small towns that dot the landscape of America.

But photographs of the business district of Nordhoff in the early days show it to have been a typical little cluster of stores with the false fronts bordering a dusty main street, utterly without distinction except for its background of oak trees. Who wrought the transformation?

Oldtimers will tell you that, although no man can be given the entire credit, the man who played a key role in conceiving, financing and executing the whole affair was Edward D. Libbey, millionaire glass manufacturer from Toledo, Ohio.

Mr. Libbey had come to the Ojai Valley in 1908 to spend a winter vacation at the new Foothills Hotel, on the recommendation of his friend Harry Sinclair. The natural beauty of the valley captivated him, and he returned year after year to enjoy its rustic charm. Possessing a rare combination of idealism and practicality, he decided to take and active part in preserving those features of the valley that he loved, and to transform those features which he considered to be a scar on the landscape into something more in harmony with their surroundings.

He gradually began to acquire land in the valley and to make the acquaintance of men living here who would be sympathetic to his dreams concerning its development. He held long conferences with civic leaders such as Sherman Thacher, Walter Bristol, John J. Burke, and Harry Sinclair, discussing various ideas for the improvement of the town and the valley. Mr. Libbey made no specific promises at these meetings, but indicated that he was interested in helping wherever he could.

As a result of these discussions the Ojai Valley Men’s League was formed to advance the interests and enterprises of the community, with Sherman Thacher as president and Walter Bristol as secretary-treasurer. Mr. Libbey was a member of the executive committee.

The San Diego architect, Richard Requa, was consulted for suggestions as to ways of making Nordhoff into a distinctive town, patterned after the villages established by the Spaniards when they first came to America. Requa proposed a mission arcade extended the length of the one business block on the north side of Ojai Avenue, as and architectural device to unify the business district. When his plans were shown to the merchants of Nordhoff, Libbey offered to underwrite the cost of the arcade if the merchants would contribute $10 a front foot toward the cost. The merchants enthusiastically agreed. When, on the completion of the arcade, several of the merchants defaulted on their payments, Libbey quietly assumed their debts himself.

Meanwhile, having acquired title to all the land on the south side of Ojai Avenue, Libbey set about transforming it into something that would enhance the beauty of the downtown district. He ordered the razing of the decaying buildings that occupied the property, and had the area cleared of everything but its majestic oak trees. At the corner of Signal street and Ojai avenue the original post office was built with its landmark tower, designed by Requa, and constructed by Robert Winfield, who was brought from San Diego to execute Requa’s plans. In another part of the property were established the first of the tennis courts which were to bring such fame to Ojai. All of this Libbey proposed to donate as a gift to the people of the Ojai Valley.

In March, 1917, the Ojai Civic Association was formed as a corporation to receive Mr. Libbey’s gift in trust for the people of the valley. On the board of the corporation were the men who had advised and counseled with Mr. Libbey throughout the entire project.

A gala picnic was held at the park by the residents of the valley on April 7, 1917. The climax of the affair was the presentation of the deed of the park and post office to Sherman Thacher, as chairman of the Ojai Civic Association.

The gratitude of the people of the Ojai Valley for the philanthropy of Edward Libbey is expressed in a plaque which can be seen today on the wall of the post office tower. It reads:

In appreciation of
the gift of this building and park by
EDWARD D. LIBBEY
the people of the Ojai Valley have
placed this tablet
April Seventh, 1917.

The arcade and the post office inspired other construction in the downtown area by private enterprise, with Mr. Libbey invariably assuming the role of sort of benevlent godfather.

In 1918-1919 the present Oaks Hotel, originally known as Hotel El Roblar, was designed by the firm Mead and Requa, and built by Robert Winfield. Mr. Libbey headed the subscription list for its construction with $10,000, with the remaining $30,000 necessary to build it being subscribed by local citizens.

The Catholic Church on Ojai Avenue was remodeled in accordance with a Spanish mission design by Requa, and the congregation was the recipient of generous donation from Mr. Libbey to assist in the remodeling.

The site of the present public library was a gift from Libbey to the trustees of the Thacher Memorial Library, accompanied by a donation of $10,000 toward the construction of the present building.

Libbey’s contributions to the development of Nordhoff were not limited to the central area of the town. One of his early land acquisitions had been several hundred acres of wooded area that lay south of the Foothills Hotel. There, on the east side of Foothill Road near Fairview he built a rustic home. Across the road he erected wrought iron gates to serve as an entrance to an area which was first known as Libbey Park, and later renamed The Arbolada, meaning “woodland”.

Libbey employed gangs of men to clear the underbrush from beneath the oaks, and proceeded to install winding roads with curbs lined by native stone throughout the area. He had three homes built in authentic rural Spanish architecture to set the tone of the development. Friends of Libbey were invited to purchase the first parcels of land in the park and erect homes whose architecture was carefully checked for its harmony with the surroundings. The area was later opened to the public for the purchase of lots, and happily, Mr. Libbey’s standards of construction have been consistently maintained.

Mr. Libbey’s death in Toledo in 1925 from a sudden attack of pneumonia came as a great shock to his friends in the Ojai Valley. His accomplishments in the preservations and enhancement of the beauty of the valley remain as living monuments to his unselfish idealism 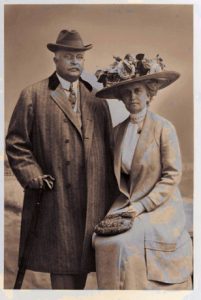 One Reply to “The story of the man who Transformed Ojai”