This story was written by Cricket Twichell.  It is based on a piece she wrote for the Ojai Valley News in the 1980’s. 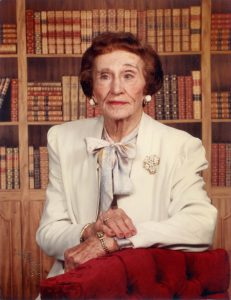 This lady knew about small beginnings. Born in Oklahoma around the turn of the century, Effie Skelton weighed in at 1 1/2 pounds. Told there was no way this child could survive, the Cherokee Indian auntie assisting at Effie’s birth ignored the doctor’s grim prognosis, wrapped Effie in soft cotton, tucked her into a shoe box which she placed in the warming oven of the wood stove and then every hour fed her a drop or two of blackberry brandy. Effie kicked into high gear and eventually became a driving force in the Ojai.

After graduating from business college, Effie saved her hard-earned money and in 1927 bought a brand new Pontiac. She had an agenda— to immediately head out west—by herself— to California. “I didn’t know how to drive backwards” said Effie” but that didn’t matter. I was only going forward.”

Ending up in Ventura, Effie married a young man who worked for Shell Oil Company. They moved to Ojai where she raised 3 children and became a realtor, specializing in Meiners Oaks properties. Her weekly column in the Ojai Valley News— “What’s Doin’ in Meiners Oaks”—- had a devoted , down-home following.

Over the years Effie became concerned because so many artifacts connected with the pioneer days of the Ojai were leaving the valley. If only we had a museum which would house these papers, tools, and etc of a bygone era! The more she thought about this, the more zealous she became in her determination to stop the hemorrhaging of the Ojai’s historical items.

Other community leaders jumped on Effie’s band wagon. Bob Browne, a local anthropologist, history buff and handyman, shared her enthusiasm for creating a museum and historical society in the Ojai. He had bought a house in the highlands above Miramonte and to his delight discovered it had been the site of a Chumash Indian village. After UCLA conducted a full-blown archaeological dig on his property, Bob wanted to house the relics which had surfaced in a place where they could be enjoyed and appreciated by.the community at large. He and Effie joined forces; and soon Lynn Rains, Arthur Waite, Bill Bowie, Lois Powers and Elizabeth Thacher hopped on board.

The founding members of the museum began working the room, asking members of Ojai pioneer families to donate articles to their worthy cause. The Forest Service offered space to store the memorabilia which came pouring in. When they needed more room, Walter Gamulski offered storage space where the American Legion Hall is today if the museum group would pay the taxes and the insurance. You betcha’!

Effie and her friends put donation cans in banks, stores, motels and public buildings. She wrote articles in the Ojai Valley News to keep the community appraised of the progress of her venture and to remind readers to donate antiques etc to add to the ever-growing collections.

In 1966, 50 years ago, the Museum opened up for business in the Arcade where the realtors office is today. At the opening reception punch was served in attractive bowls the early Chinese settlers had used for washing their hair. That day Effie got to raise two flags over the new Museum, one which had flown over the capitol in Sacramento and one which had flown over the White House in Washington. Ojai had itself a bona fide Museum!

As the collections continued to grow, in 1979 a new home was found for the fledgling Museum— on Montgomery Street at the former firehouse which had been built in 1937 with WPA funds. Bud Bower donated the services of Ojai Van Lines to transport the possessions to the new location; Bob Browne and his crew built dioramas depicting animals in the Sespe back country; eye-catching displays were concocted. People came. In one year Effie, who manned the guest book every day for over 20 years, counted 7,000 visitors from 31 countries.

What started as an idea in Effie’s noggin, grew into an institution which is thriving today. Like her old Pontiac, the Museum only goes forward!

One Reply to “Effie Skelton”